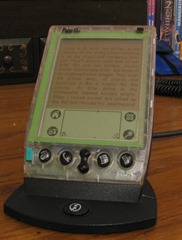 On The Verge, consumer gadget reviewer Walt Mossberg introduces a new Verge gadget blog, Circuit Breaker, by reminiscing on the gadgets that launched us into gadget-craziness back in the ‘90s and early 2000s. His essay discusses early digital cameras, Windows sound cards, higher-speed modems, and—most relevant here—the Palm Pilot PDA and its Handspring successors, and the iPod MP3 player. I’m actually a little disappointed he doesn’t also touch on the Rocket eBook and other early e-readers, but I suppose he only had so much room in the column.

It’s interesting to consider how these early products effectively set the stage for the multimedia-in-your-pocket present-day. The Palm Pilot was the first popular e-reader, after all, offering an intriguing glimpse into the digital future even if it didn’t have any actual Internet connectivity yet. The iPod put hours and hours of music in people’s pockets—it wasn’t the first hard-drive music player, but immediately became the most popular one. This, in turn, led to the ability to listen to audiobooks without having to cart along a suitcase full of cassette tapes, and set the stage for Audible to launch and eventually get purchased by Amazon.

And Mossberg makes a key point that I have to admit is absolutely right: for all the flaws these gadgets might have had, and the newest generation of gadgets still do have, they’ve never stopped being exciting. Every time you get some new gimmick in your pocket that can do things you couldn’t have imagined doing before, it’s amazing. For me, that first thrill was reading all my favorite e-books and catching up on news and events via a succession of PalmOS powered and other devices. Later it was retiring my cassette tape carry-alls and letting my iPod, and later my iPods Touch, carry the tunes. Getting my first cellphone, eventually getting my first smartphone, then getting a better one. Getting tablets and e-readers (then better tablets and e-readers). Snagging a MiFi, then later a Karma Go, and being able to take them all online with me wherever I went.

It’s crazy how much we take for granted now in this gadget-laden world. Maybe we should try to get back in touch with our memories of the sheer excitement we felt from first being able to read a whole book—even a tree-killer like A Fire Upon the Deep—on a grainy little LCD screen with an Indiglo backlight. Think of that same excitement now when you can carry entire bookshelves around with you on your Kindle, or pick up your smartphone or tablet for an instant face-to-face chat with a friend halfway around the world.

Perhaps that’s the real thing people miss when they’re concerned we might have reached “peak smartphone”—not so much being able to do something new with their gadgets, but the sheer excitement of finding they can do something new with their gadgets. But there should always be more gadgets and more excitement around the corner. I look forward to finding out exactly what they’ll be.