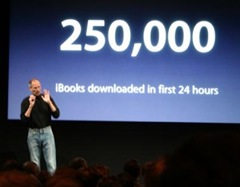 Update: Video of the event is now available for download, in multiple resolutions of Quicktime and MPEG-4.

I just got finished watching the iPhone OS 4.0 preview event through liveblogging from Ars Technica and Engadget. Here are the points of overall interest.

He then proceeded to show off a number of iPad applications, including Epicurious and Marvel Comics, then settled down to talk about the iPhone and the developer preview of iPhone OS 4.0 which ships this summer.

After announcing a number of details and new APIs that will be of most interest to techies, Jobs settled down to talk about the new OS’s “tentpole features”.

The first of these was the long-anticipated multitasking. Jobs explained that the problem was figuring out how to implement it in a way that did not drain the battery or degrade the performance of the foreground app.

As Jobs described the interface, it sounds very similar to the Windows auto-hiding task bar, or whatever the Macintosh’s equivalent is called: on clicking the button, a row of the apps you’re currently running comes up along the bottom of the screen.

At the end of the show, Jobs noted that multitasking would only work on the iPhone 3GS and iPod Touch 3rd-generation and up.

Jobs brought Scott Forstall forward to explain that Apple did this by distilling down exactly what services apps need in order to multitask in the background and providing those services as APIs to developers for 4.0. Examples of apps that could benefit included Pandora and Skype.

Jobs came back to talk about the second tentpole feature: adding folder organization to the “jiggly” app moving screen. Dragging one app on top of another would create a folder with both those apps in it, and the folder icon would include mini-icons of all the apps inside it.

Enhancements to the Mail app were the third tentpole feature, including a unified inbox for multiple e-mail accounts and support for multiple Exchange accounts.

Tentpole number four is probably the one of greatest interest to readers here: adding iBooks to the iPhone platform. It will look identical to iBooks on the iPad, only smaller. The bookshelf and store work the same. “We think customers will really enjoy this,” said Steve Jobs. It will include the same free Winnie the Pooh e-book as the iPad version.

The sixth was “game center,” a social gaming network for the iPhone like X-box’s Live Arcade. The seventh was “iAd”, a mobile embedded-video advertising system built into the iPhone’s OS itself for the benefit of freebie app developers.

The new OS will be available for iPhone users in the summer, and the new features will come to the iPad in the fall.

As mentioned above, multitasking will only work on the most recent generation of iPhone and iPod Touch hardware. “Many” features will work for the iPhone 3G and iPod Touch 2nd generation. There was no mention of whether first-generation devices (such as my original iPod Touch) will even be able to install OS 4.0 at all.