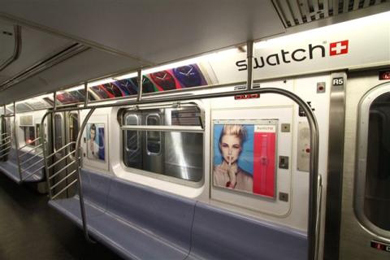 I’m all for creative marketing from the indie folks—it’s a crowded market, and you want to stand out, no?

What I don’t understand? Spending money on this marketing without taking steps to make sure it’s effective.

Take today’s little case study: I was on my way downtown and saw my first ever e-book subway poster ad.

The poster was the little half-size kind they mount up at ceiling level, not unlike the Swatch ads shown in the photo above. A given subway car might have 10 to 15 of these per side, and often someone will rent out a whole car for a themed promotion. The ad I saw today was just a single panel.

I remember that it featured two book covers and some text. It also had a bit of an amateurish feel to it—there were no quotes or reviews, and the copy called the books “e-reads” or “e-novels: or something. I also vaguely remember the initials of the author’s name—I believe one of them was an “R,” and the last name had a “Y” in it. The books had a local theme and one of them had the word “Rosedale” in the title. That’s it! 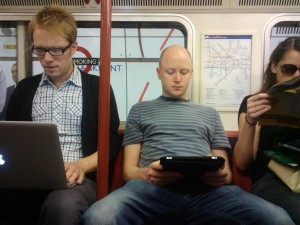 The ad was too high up for me to get a decent picture, or to scan the offered QR code while in the thick of rush hour, so I didn’t have much else to go on. No problem though, right? Because I could easily come home and find it online, since surely an author astute enough to put forth a subway poster would have a website, correct?

Alas, some Google searching for “Toronto ebook Rosedale” failed to turn up any hits. I tried various permutations on the author’s possible name (“Marlyn,” “Mabyn” and so on), and also got nothing. It just defies logic to me that this person would go to all the trouble and expense of putting out a subway poster and then not even have the most basic of websites or Facebook profiles—or anything—for the maybe-curious reader to land on once they get home.

(Note: Have any other Toronto or Ontario residents out there seen this ad? Does it ring a bell? We want to find it! —Ed.)