The man with one clock, they say, knows what time it is; the man with two clocks is never sure. Where does that put me, the man with 11 Android tablets?

I don’t actually have 11 tablets, of course. My current total is four, of which one is out of commission and one is too slow to be much use for anything. But up until yesterday Amazon thought I did.

Why? Because the tablets occasionally crash, and I then have to reboot them and reinstall all the software. The first time this happened I also had to download all the apps from Google Play again, but then I discovered App Backup & Restore, which backs up Android apps onto the SD card, from where they can be quickly restored. Among the restored software is Kindle for Android, and each time I log into Amazon and reconnect it after a crash, it assumes I’m adding yet another tablet, and makes a new entry to that effect in my Amazon account. Which is why Amazon regards me as a tablet tycoon.

This can become a problem, because Amazon won’t let you share your e-books among more than five devices, including the Cloud Reader and the Android for PC platform, so a proliferation of spurious Androids can put a crimp in your legitimate access to your library. Luckily it isn’t hard to fix, although the Web page on which to do so is a little tricky to locate.

If you click ‘Your Account’ from the Amazon home page (log in if necessary), then select ‘Manage Your Kindle’ from the drop-down list that appears, that should bring up a list of all the books in your Kindle library, with a menu of links at the left-hand side. One of those links—‘Manage Your Devices’—will display the devices that Amazon thinks you’re currently using, along with the email addresses you can use to send documents to them. You can then delete any spurious entries and edit the remaining names to make them more specific. Changes you make here will appear in the Settings panel on your mobile devices next time you synchronise.

Then just go back to the ‘Manage Your Kindle’ page for a moment, because this is a useful front-end from which to control your library and set which items appear on your devices. It also allows you to remove items, which you don’t seem to be able to do from 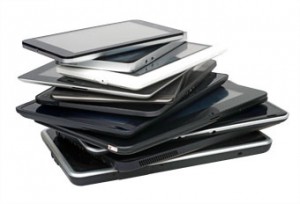 the devices themselves—at least, not the Android tablets. This is your chance to get rid of all those rubbish books you downloaded for free when you first set it up and were so excited about the whole thing.

The multiple registrations issue affects the Google Play Store too. They’re also under the impression that I have numerous Androids, though only eight for some reason. And unlike the Kindle, there doesn’t appear to be any permanent fix for this in the Play Store, although you can hide devices that you no longer own or use. Luckily there are no restrictions I know of (yet) on the number of devices you can download a purchased app from the Store onto.

If you’re continuing to have trouble with Android crashes, by the way, you might also want to look into a different program launcher. The default Google launcher forgets where you’ve put all your app icons in the interface when it crashes. I’m told that others, like the Go Launcher, don’t, but I won’t have the chance to verify this until the next crash. I can hardly wait!