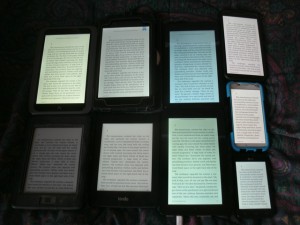 What’s in a name?

On The eBook Evangelist, Glinda Harrison poses an interesting question: what is an e-reader, exactly? She sees a lot of people being sloppy about the terminology and fears the potential for confusion.

Harrison notes that people used to use the term to apply strictly to dedicated devices specifically made for reading e-books. (“Probably e-ink,” she describes it, which is kind of funny when you consider I remember the days when a “dedicated device” for e-books was the RocketBook or other LCD-screened gizmos.) The problem she sees is that people tend to treat all categories of e-book reading device as if they’re the same one, when each one actually has different strengths and weaknesses.

How many articles have you read that slam e-readers for the blue light or the backlight that keeps someone awake at night? What about all  the distractions that keep you from reading or complaints how difficult it is to take notes on a device? Each one of those questions has a different answer, depending on the device we are reading on. But the fact that all of these attributes is linked to the generic term “e-reader” can cause a great deal of consumer confusion.

And then there are the conversations she has with people who say they’re “looking for an e-reader” when it turns out what they really want is a tablet that can also read e-books.

The answer, of course, is that you figure out what kind of “e-reader” they’re discussing from context. Just like you do when people use other general terms that could apply to different specific classes. For example, “book”.

A “book” could be a paperback, trade paperback, trade hardcover, coffee-table book, textbook, bound illuminated manuscript copied by monks, etc. It could even be an e-book. Should people only refer to some particular class of book when they use the word “book”? How can you tell if they’re talking about, say, an ordinary trade hardcover instead of a Gutenberg diary?

And yet, we somehow do manage to get by, continuing to use the general word “book” in everyday conversation. I think we’ll do the same for the general word “e-reader.” An e-reader could be an e-ink device, a phone, a tablet, or even the specific app you use on the phone or tablet. It reads e-books, hence, it’s an e-reader. If someone is being unclear about what kind of “e-reader” they mean, well, ask them what they’re talking about and go on from there.

The problem’s only going to get worse when and if people eventually fall away from the old e-ink devices in favor of multipurpose devices like phones and tablets. If no one uses an e-ink “e-reader” anymore, how can you justify call anything an “e-reader” at all? Harrison suggests that, as that happens, “the term e-reader may face even more scrutiny  in the long run”—but I think it’ll simply do exactly the opposite, and continue to be used to describe all manner of devices and apps for e-reading, whether they’re dedicated or not. After all, we’re still using the term “book” after hundreds of years, whereas the illuminated manuscripts it “originally” described are long since lost to history.

It probably doesn’t really matter, in the end. An e-reader by any other name would still read as sweetly.