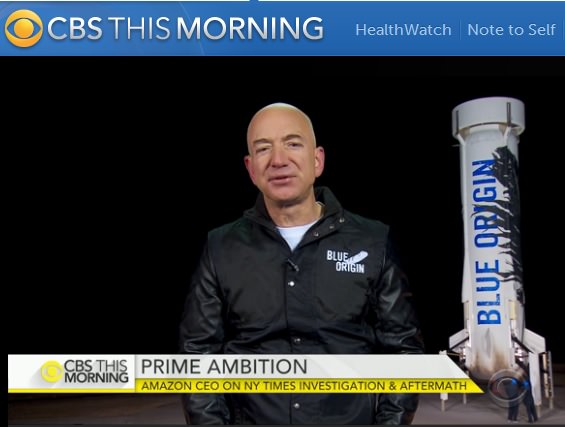 A recently aired interview on CBS This Morning with Charlie Rose shows Jeff Bezos “still mad at The New York Times,” as Observer.com has it. But it also allowed Bezos to share some details about Amazon’s own newspaper ambitions – and some context on any of the anti-Amazon or anti-ebook NYT reporting you might happen to read.

Taxed with the celebrated supposed NYT expose of “brutal” Amazon working practices, Bezos is still insisting that “you can’t have a corporate culture like that’s the one described there and then do the things Amazon does.” Amazon people (Amazonians?), he insists, “have to love what they’re doing. We’re full of inventors and people who like serving customers.”

No matter what you think of that reply, it’s interesting what Bezos brings up regarding newspapers and the NYT in his ensuing responses. Of his new asset, the Washington Post, he says, “we’re working on becoming the new paper of record. We’ve always been a local paper. Just this month, the Washington Post passed The New York Times in terms of numbers of viewers online. This is a gigantic accomplishment for the Post team. We’re just going to keep after that.” And in support of this goal, he adds, “we have a lot of patience for that job.”

So, the Post, in Bezos’s hands, is out to steal the NYT‘s crown. And the NYT just happens to be the venue whose drastically slanted coverage of e-book sales figures led me to coin bookenfreude. And which did the anti-Amazon expose. And which has been sharing critiques of e-books hand over fist. And reporting the Amazon/Hachette spat in highly partisan terms. Well, you know what they say: “Once is happenstance. Twice is coincidence. Three times is enemy action.” And fourth? And fifth … ?

Not that I’m suggesting, of course, for one moment, that competitive and inter-corporate rivalry might influence NYT‘s reporting or whole posture towards e-books and Amazon …