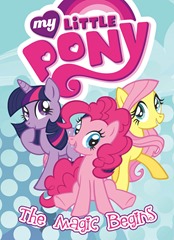 The Humble Bundle has become a major force in distributing e-books and digital comics over the last couple of years, to the point where many of its bundles pass unremarked here. But every so often it’s worth taking notice.

The current Humble Comics Bundle is a bundle of digital comic books from IDW Comics based on the popular Hasbro animated series My Little Pony: Friendship is Magic. As I explained a few years ago, Friendship is Magic spawned the “brony” phenomenon when cynical 4chan regulars tuned in expecting to mock Power Puff Girls creator Lauren Faust’s new toy-driven show, and instead were floored by how good it actually was.

Even after Faust moved on to other projects, leaving the show in the hands of its creative team, the show has continued to enthrall fans for several years now, and it’s not too surprising that it’s spawned digital comics, too.

This Humble Comics bundle collects 20 comics so far into several tiers—one available for paying anything, one for beating the average (currently $14.18), or one for paying at least $15. There’s also another tier, at $25, which includes all of the above plus an actual printed book exclusive to the Humble Bundle offer. The bundle is only a couple of days into its first week of availability; more comics will be added at the beginning of the second week. The comics are available in multiple DRM-free formats, including CBZ, PDF, and EPUB, for reading on a variety of apps and devices.

As with all previous bundles, purchasers can choose to split their money between the publishers, the Humble Bundle itself, and a charity chosen by the content partner. In this case it’s the Hasbro Children’s Fund, which offers grants to programs that support children in need.

It’s been a long time since I’ve done much Friendship is Magic watching, so I don’t know whether I’m interested enough to buy these for myself. But for those who are still into the show, this is really quite a bargain. It will be available for just over 12 1/2 more days.