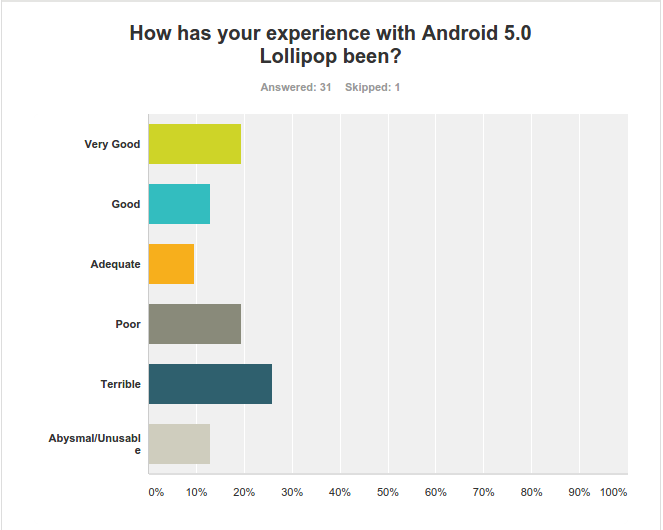 As many of you will remember, after my article “Android latest: Lollipop does not suck” brought reams of comment (67 posts in all) primarily to the effect that in their experience Android 5.0 Lollipop did suck, especially in the context of a mandatory upgrade, we called a poll to systematize the feedback. The results of the SurveyMonkey poll, with 32 responses in since December 6th, and most (some 70 percent) upgrading Nexus 7 devices (2012 or 2013 versions) are as follows.

Asked how their experience of Android 5.0 Lollipop had been, almost 20 percent said “Very Good,” and a further almost 13 percent said “Good.” (And I was one of that 20 percent.) However, the majority of answers ranged from Poor to Abysmal, with the greatest number saying Terrible. And exactly half of the users reporting problems said that these had been because of specific apps loading slowly, crashing, or failing to perform, with slow-running and poorly performing devices, and frequent crashes, cited as the join runners-up in user issues, with 20 percent each.

Responses on the questions of actual solutions to the problems suggest that Android is just barely hanging on to user loyalty, but has tested this severely, and that Lollipop has won few friends. The single most popular remedy was an immediate supplementary upgrade to fix the problems, but close behind came the call to withdraw the upgrade and re-release it when the bugs have been ironed out. With a significant minority calling for Lollipop to be withdrawn entirely, Android clearly has its work cut out to win users round. 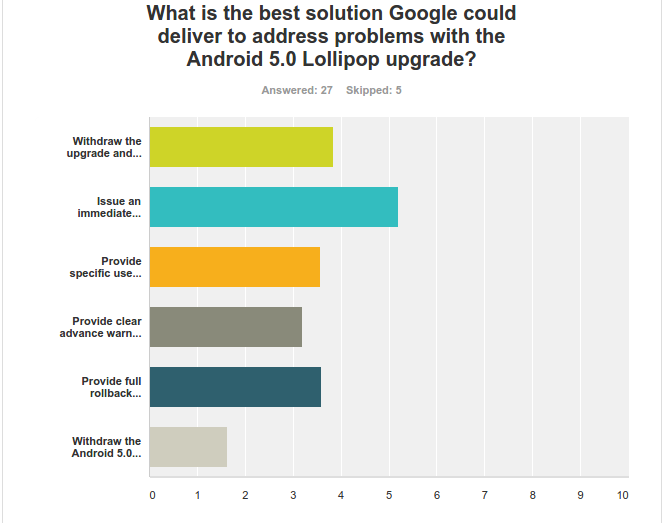