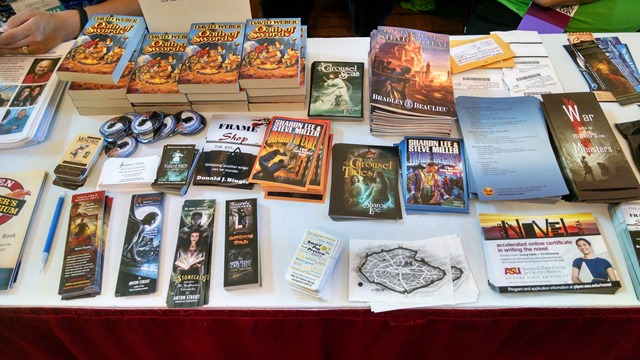 Baen publisher Toni Weisskopf has just announced via e-mail newsletter and the front page of the Baen.com website that Baen is changing the completion date of e-books published via its e-book bundle program (nee Webscriptions).

The way Baen’s bundles have worked for the last 17 years was that the first half of all the new-release e-books in a given bundle was available to that bundle’s purchasers three months before paper publication date, the third quarter of all the books became available two months before, and the e-books were made completely available in the middle of the month before the paper editions hit the stores. Under Baen’s new deal with Amazon, it also had to stop selling that bundle at that point, as it released the individual e-books to its own, the Kindle’s, and other e-readers’ stores.

However, now Baen is now shifting that completion and availability date back by a couple of weeks to coincide with the print street date. Weisskopf writes:

The April 2016 bundle contains the ebooks that will be available in print on April 5th. The final versions of these ebooks would have been scheduled to go live as ebooks on all retail venues on March 16, 2015, and will now be available in their entirety April 5, 2016. At that point, the Monthly Bundle will become unavailable for sale.

This means that Baen purchasers will no longer get that two-week advance peek at e-books in the bundles. However, it also means the multi-book bundles will be available for purchase for that much longer, instead of being pulled two weeks before the paper books came out. (The initial sales offering dates of the bundles will remain the same.) Baen’s EARCs, the unproofed advance copies released several months early, will be unaffected by this change.

When you think about it, it’s fairly easy to understand why they would have wanted to harmonize the official release dates. If a book was scheduled to hit print in January, having the e-book version come out in December of the year before could affect its eligibility for award nominations. This fix will not entirely solve that problem—Lois McMaster Bujold’s latest Vorkosigan novel, Gentleman Jole and the Red Queen, was published in January and February of 2016, but was declared eligible for the 2015 Nebulas because its EARC was out in October. Nonetheless, it will at least reduce the number of edge cases for any Baen books that don’t get EARCs.

Baen customers might find it a touch disappointing that they will now have to wait for two more weeks before they get to read the ending, but at least they’ll be available for purchase for that much longer. Nonetheless, most major publishers who haven’t been selling e-books as long as Baen have harmonized their e-book and print book street dates already.

The fact that the bundles will be available for sale for that much longer is at least one silver lining. But given that many bookstores treat street dates fairly flexibly, this means in some cases Baen’s print book fans will be able to steal a march on the e-book subscribers for a change.

The change is currently under discussion by Baen Barflies in the “Baen Administrivia” board of the Baen’s Bar forum. (Free registration required to read.)