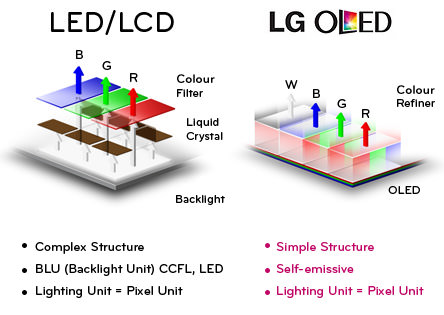 Rumors of Apple ereading devices with OLED screens go back at least as far as 2010. Now a fresh turn to the story has come via a Korean tech news site, which claims that Apple has concluded a framework agreement with Samsung Display and LG Display for a flexible OLED production facility to come onstream over the next two or three years, turning out OLED screens for next-gen iPhones.

This is one rumor that may have more credibility than most, given that Apple already uses flexible OLED displays from LG Display in the Apple Watch smartwatch. The rumor mill has been churning at greater speed over the past couple of months, and now the latest Korean report comes closest to substantiating it. Furthermore, Apple filed a recent patent application for a fingerprint sensor in an OLED display which clearly shows an iPad-style display rather than a smartwatch – and why patent something if you haven’t at least some plans to use it?

The original report on the patent application from Patently Apple claims this as “Apple’s Most Advanced OLED Display Invention to date,” given that it’s “a unique silicon-OLED display that will be brighter and thinner.” One suspects the famous Apple reality distortion field in effect there, given that Samsung has been pretty much standarized on AMOLED screens for its high-end phones for years now, and other flagship Android devices, including the Nexus 6, also use OLED technology. The LG G Flex 2 even offers OLED’s much-vaunted flexibility, right here right now.

Given that Apple’s keenest competitors in smartphone displays are apparently its technology suppliers, and the effort Samsung and LG have already put into developing new and different screens (Galaxy Edge, LG Flex), it’s hard to imagine that any OLED iPhone debuting in 2018 really will have a dramatically superior display to next-gen Android phones. The Korean report does state that the new display plant will turn out “flexible OLED” screens for Apple, but there’s no indication that these will feature in, for instance, a curved or beveled iPhone or iPad.

Some of the latest reporting around the Korean news quotes the designation of the first phone to use the new displays as the iPhone 7. Given Apple’s release cycle, though, it’s more likely to be an iPhone 8 if it comes out in 2018. Does it matter to anybody except more rabid Apple fanboys? Perhaps not, because I wouldn’t expect any radical improvement in your ereading experience from an Apple OLED display. After all, we’ve had the Retina Display for years now, and it hasn’t been dramatically different enough to provoke any kind of stampede of ebook readers away from the Kindle or from Android devices. So, keep on ereading, people: You can wake up when it’s all over.