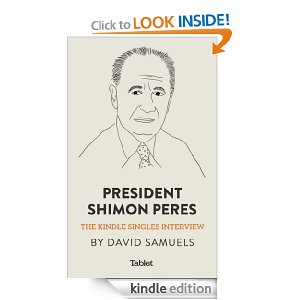 I do like what Amazon is doing with short-form writing, and the Kindle Singles Interviews is a good addition to the Singles family.

The series debuts with an interview with Shimon Peres, the President of Israel, and it’ll set you back a whopping $0.99.

I know: You can get entire novels for that price, but I still think this is a good idea. It had seemed like short-form reading had been going out of favor as fewer magazines devoted to them were available. It’s a great niche for the e-format, however. No printing costs. Easy distribution. All the factors that have made e-books successful are there for shorter works.

I like that Amazon is using the Singles platform for works other than fiction. I recently bought “Asperger Love: Searching for Romance When You’re Not Wired to Connect,” and enjoyed it. It’s the sort of thing I might have once found online, read and then forgotten. I read it more thoroughly because I paid for it, and now I’ve got it in an archive, which was handy when I was writing a short story with a character who was on the Asperger spectrum.

Interviews aren’t generally my thing to read, but lots of people do enjoy them, and I think Amazon was smart to add them to their Singles series.