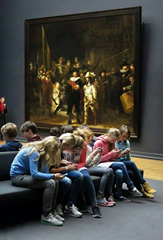 If you saw this photo, how would you react? Would you jump to the usual “get off my lawn” conclusion—that kids these days don’t appreciate fine art, and would rather piddle around on their phones instead? Would you worry that “screenism” is taking over our youth? The photo went viral, provoking much of that sort of indignation all over social media and blogs. Just right-click the image and choose the “search Google for this image” option and see what kind of results you get. Or perhaps you remember seeing it when it originally came around.

But if you made those same assumptions, you’d be wrong—at least in this particular case. On Medium, José Picardo explains the context. A few minutes earlier, the kids had listened attentively to a lecture on the painting by an art expert. They had then been directed to use the Rijksmuseum’s iPhone app to complete a homework assignment on the painting—which they were now doing.

Picardo cites a similar example of coming into a classroom at school and finding three girls sitting on the floor using iPads. Two turned out to be reading for pleasure, and the third was working on her English homework. He points out that, had they been seen giving the same level of concentration to paper books, it wouldn’t even have been considered noteworthy—but to many onlookers, the use of new technology can make it seem inherently suspicious.

Of the photo in question, Picardo says:

I wonder whether the photo would have caused so much indignation and disapproval if it had depicted students ‘ignoring’ the masterpiece while reading a paper leaflet or museum brochure instead. Though I suspect not. It would appear that, once again, reports heralding the death of civilisation at the execrable hands of technology might have been greatly exaggerated.

This, then, is the other side of the coin from the much-lauded e-book fact that no one can tell that you’re reading a trashy romance novel. Because no one can tell that you’re not surfing the web, or chatting with friends, or hanging on social media instead, either. And it seems there’s something about the combination of youth and technology that makes many people inclined to jump to conclusions.

We want kids to read more—but if we come across them engrossed in their smartphones, are we going to assume they are reading? Or doing other constructive work? This might be an issue we’ll need to address as digital technology becomes increasingly prevalent.

Or maybe we’ll just grow out of it as the technology becomes increasingly “normal.” Who knows?