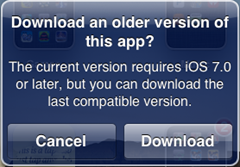 This is a slightly old story, but I thought it was worth following up on when I had the chance. A few weeks ago, Apple quietly added a new feature to its iOS app store. It used to be that when you had hardware too old to run the latest version of an app, and you lost the version of it you had, you were out of luck.

After OS 7 came out, for example, when I tried to update my 1st-generation iPad’s Zite app, I was told that the new one required OS 7. So if I had accidentally lost Zite in a device crash and rebuild, I would have had no way of downloading the version of it I could use; the version for OS 7 was all there was. This is more than just theoretical for me. I had lost a lot of applications from my old first-generation iOS 3.1.3 iPod Touch that way. Skype, Twitter, Facebook, the Kindle and Barnes & Noble e-book readers…the current versions can’t be downloaded to my iPod Touch.

But lately something changed, at least for the iOS operating system—because a user of a 2nd-generation iPod Touch happened to notice he was now presented with the opportunity to download the last compatible version of an app from the app store.

This is a pretty big sea change in terms of Apple’s policies toward older hardware. For as long as Apple has been making hardware, it’s been known for burying the software necessary for older versions of its operating systems, in the name of requiring people to move to newer ones. Try downloading the versions of applications required for older versions of OS X, for example, and you’ll get nowhere. The X server you need for Jaguar if you happen to have an old Wall Street Powerbook that uses it? Ha, good luck with that. Buying an older iOS device was an exercise in frustration because Apple’s iOS development environment is essentially set up to force any new software versions developed in it to require the latest version of iOS.

But suddenly, older iOS hardware might not be such a bad deal after all, because you can now get older software for it. If you got an older iPhone or iPod Touch, you can still download some versions of popular e-book apps onto it. (And social networking, etc.) Which provides even more economical e-reader device opportunities. For instance, you could get a used but fully-functional 8 GB 2nd-generation iPod Touch for as little as $55 from Amazon, and maybe even less on eBay.

Of course, this won’t necessarily work for all applications. Sometimes, there are API changes on the back end that aren’t reflected in newer versions. For example, the latest pre-OS7 version of the Reeder RSS reader is locked to the now-defunct Google Reader. It’s only the OS 7 version that can hook up to Feedly or other sources.

Also, there seems to be a limit to how old the hardware in question can be. While I am able to get the “download the last compatible version” prompt from apps on my iPad, the iPod Touch just refuses even to try to download. I guess you must have to have at least OS 4 to take advantage of this new feature, which means my Touch (and, I expect, first-generation iPhones) would still be out of luck. (Not that this is a huge problem for me, since I finally got fed up and moved over to Android.)