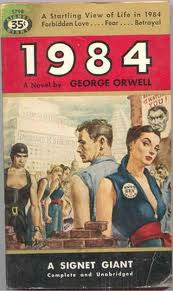 What if Amazon wiped out all your Kindle books and refused to let you open another account? I don’t know what if any sins a customer committed, but such an Orwellian scenario is said to have actually happened. No, I’m not just talking about the remote deletion of 1984, but rather the mysterious zapping of the customer’s entire Kindle library.

The most likely scenario here, as guessed at by BoingBoing, is that the Norwegian customer simply lived outside of the territories for authorized purchases.

While I love content providers—I’m one myself—Amazon’s latest action shows why the Digital Public Library of America or another nonprofit needs to get into the business of offering digital lockers to safe-keep books and other content downloaded from retail outlets and elsewhere. Let the laws be changed if need be to require publishers and retailers to cooperate with library-controlled digital lockers.

If publishers insist on DRM, which I would much rather they not, this is all the more reason why library patrons need digital lockers. I’ve lost a few books myself because of changing DRM standards. Microsoft’s phasing out of Microsoft Reader is yet another indication of the need for protection against the impermanence of DRM and proprietary formats, even if for now customers can still access previous purchases. Better that typical books be in ePub anyhow. If nothing else, libraries should have the express legal right to convert books to ePub for digital lockers and other uses, both in terms of accessibility and consumer rights.

Along the way, such lockers would be one way for DPLA-powered libraries to engage even the taxpayers who normally didn’t rely on libraries for books and other content. Links in the locker could direct them to library offerings and ideally make regular patrons of them.

Yes, if need be customers could pay storage charges, but in many cases, there would be no storage in the customers’ lockers, but rather links to master files elsewhere. Consisting mostly of text, not images, most books don’t take up that much space anyway.

Ironically, despite the howls that might come from retailers and some publishers, the locker arrangement would actually help sales of the best stores and houses since readers could more confidently buy E. Stores, as has been noted, could add value through social media. I’d like to see libraries able to sell and rent books, but I believe they should also provide store-related links—we need a variety of business models.

Over the centuries, a major attraction of books has been their permanence; DRM and the zapping of personal libraries can only detract from the glory of the medium, and the time has come for corrective actions such as the proposed lockers. Besides, hasn’t Random House said that libraries themselves should be able to own books for real and lend them within the bounds of fair use? The locker proposal would certainly be in the same spirit, and I’d hope that Random House would see virtues here.

As I see it, the content lockers could preserve not just commercially originated media, but also items originated by library patrons, including family photos and other content that patrons are now entrusting to Facebook.

In fact, I continue to see libraries as potential Facebook alternatives, with help from possible partners such as local newspapers.