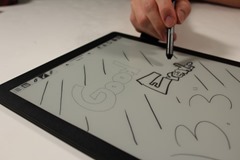 Earlier today, Joanna expressed doubts that Michael Kozlowski’s Indiegogo crowdfunding campaign for a 13.3” e-ink Android tablet would fly. The odd thing is, I’m not so sure. It’s a little funny for me to say that, as dismissive as I was of Kozlowski’s earlier failed campaign for a 6” $189 version of the tablet—but I think this one may be a much better prospect, for a number of reasons.

Kozlowski comes right out and admits this in his campaign documentation—although he got 60+ orders, it wasn’t anywhere near enough to fund, and he received far more comments from would-be backers that they wanted something bigger—much bigger. And I’ve got to admit, there aren’t a whole lot of alternatives available in that size.

The only other 13.3” e-ink readers are the Sony DPT-S1, which is currently $799 after starting at over $1,000, is only for sale to legal and banking industry professionals, and only reads PDF, and the Onyx Book Max, which is only available for pre-order from China or Europe at about the same price as Kozlowski’s proposed tablet. So, the market is not exactly saturated.

Another improvement is that Kozlowski was able to talk the OEM down to a minimum order of 60 devices, rather than the 500-unit minimum the Ultimate had. That means he only needs a remarkably small first order to get the manufacturing started—and surely there are at least 60 people out there who wouldn’t mind having an e-ink Android tablet that big. In that light, a goal of $42,000 seems a lot more reasonable than the $220,000 goal of the prior campaign—and barely a day into it, Kozlowski has already racked up 9% of its goal in donations, almost half the amount he earned over the two months of the entire first campaign.

Kozlowski’s tablet’s specs seem reasonable. The only areas where it comes up a little short by comparison to the Ultimate is that it only comes with 4 GB of internal storage, rather than 8 GB, and the lack of a frontlight. But then, since the tablet is e-ink and meant for e-reading, most people won’t put too many apps other than e-reading ones on the device, and edge-of-screen lighting really doesn’t work too well on a screen that big anyway.

I emailed Kozlowski some questions, and he told me the screen will be a flexible e-ink MOBIUS panel, the same screen as the DPT-S1 uses, so it won’t break easily if dropped. Kozlowski’s tablet will support both finger and stylus use, not stylus-only like the Onyx. The OEM manufacturing it is Netronix, who is one of the better-known off-brand e-reader manufacturers in recent years. According to the Mobileread wiki, it has manufactured readers for different companies including Pocketbook, COOL-ER, Astak, and others; Wikipedia notes that it manufactured the first Kobo e-reader, too. This wouldn’t be the first Android-based e-reader it’s made, either.

The price seems a little high, but it’s a very specialized sort of device. Most people who enjoy reading e-books are content with smaller screens, and you only need bigger ones for fairly special uses—technical documentation or textbooks, for example. It’s to be expected with such low order quantities, the price will be high—even given that he’s accepting very low profit margins in order to get the project off the ground. Perhaps the most impressive thing is that he was able to get Netronix to go so low at all. A 60-unit production run is practically artisanal.

But remember how much the earliest Kindles cost when they launched? Over $399 in 2007 dollars ($468 in today’s money), for a 6” screen, a closed operating system, and no WiFi. By comparison, $699 doesn’t seem all that bad for 13” and Android, does it? Especially given that economy of scale should kick in and the price should fall if he sells very many of them at all.

If the e-ink tablet turns out to be everything Kozlowski promises, it could be quite useful and versatile. As an Android device, it could utilize e-reader apps from the major stores or third parties. Imagine reading a Kindle e-book on a screen even bigger than the defunct 9.7” Kindle DX. Or e-books from Google, Nook, or Kobo, all on the same device.

Furthermore, 13.1” is just a hair smaller than the 13.9” diagonal measurement of a letter-sized sheet of paper, which is the standard page size for most PDF files—which means that it would read these PDFs at effectively full size. As such, it would be one of very few currently-available mobile devices that actually could. That would be useful not just to bankers or lawyers, but to anyone who deals with PDFs. For example, role-playing gamers could finally stop having to choose between trucking around pounds of paper or putting up with an awkward portable reading experience. Fans of black and white manga comics will be delighted, too.

Plus, it will also run regular Android apps. And while a lot of Android apps might not look too great on a greyscale screen, especially with e-ink’s slower draw speed than LCD, apps that don’t require a lot of animation should work just fine. You could even use one of the second-screen apps available for Android to turn it into a secondary display for your computer or laptop. (Unfortunately, Kozlowski confirmed the tablet will not have Bluetooth, so it won’t be possible to hook up a keyboard and use it as an e-ink writer.)

The tablet will also include a WACOM digitizer on the screen with 1024 pressure levels for the stylus, so it could be useful not only for note-taking but also for drawing and sketching. I could see artists taking it outside to draw in natural light. As an e-ink device, battery life will be a lot better than LCD tablets’, too.

Best of all, the firmware will be open-sourced and the tablet will ship unlocked so users can modify or upgrade it when they get it. That’s like the antithesis of Amazon’s approach to e-ink readers.

For people worried about what kind of support the hardware will come with, Kozlowski told me that the devices will have a one-year warranty against shipping breakage, hardware defects, or the device ceasing to function. They will also be insured for their full value when they’re mailed out.

That being said, in some respects it seems a little too good to be true. As with any crowdfunding project for expensive hardware, I do have to counsel caution. Even granting Kozlowski has the best intentions, hardware Kickstarters can often run into unanticipated obstacles along the way, especially when their runner is inexperienced. For example, Robert X. Cringely recently posted a look at a number of unexpected excess costs accrued by his sons’ Minecraft server Kickstarter. It’s not impossible that something similar could happen here.

And then there’s the case of that UK drone manufacturer whose Kickstarter failed so badly that Kickstarter commissioned a journalist to investigate. Not that the warning signs from that project apply here, but it’s nonetheless an important reminder to would-be crowdfund backers of expensive projects to—how would the Latin go? Caveat patronum?

It’s also worth noting that Kozlowski will receive all pledged funds even if the campaign doesn’t reach its $42,000 goal. (He received the entire $7,519 from the first campaign, but has promised its backers a special discounted rate for the new one.) Which means kicking in might be a bit of a gamble, though given how much it’s taken in so far it doesn’t seem unreasonable to expect he’ll make goal this time.

But for all that necessary raining on Kozlowski’s parade, I really do hope the project succeeds. In fact, I hope it ends up with enough orders over time that the price can fall by a few hundred bucks—especially if other manufacturers see the demand and decide to produce something comparable on a larger scale. I don’t think I’d want a 13” reader enough to kick in $700 for it, but if I had money, maybe $300 to $400 might not be unreasonable.

But people who care enough about it to adopt early might well consider $700 a fair price—especially if they can write it off as a business expense. So, from the perspective of the more devices the better, I wish Michael Kozlowski the best of luck in meeting his goal and shipping the hardware to his backers. I’ll definitely be keeping an eye on this to see how it goes.