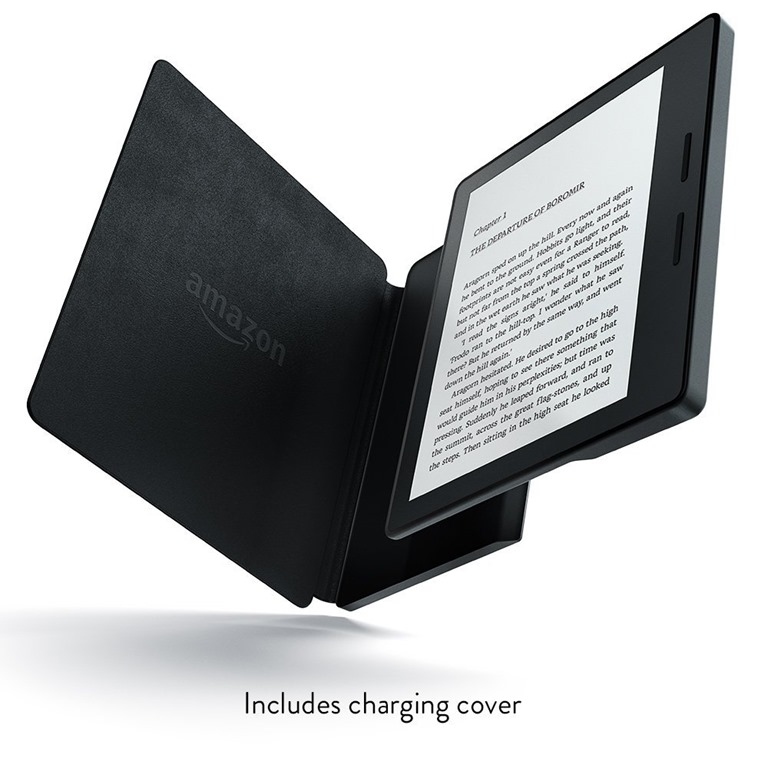 When Nate Hoffelder at The Digital Reader reported on rumors the new Kindle Oasis might have Bluetooth and speech synthesis functionality built in, I was notably skeptical. Amazon had moved away from text-to-speech functionality in its recent line of Kindles and hadn’t mentioned anything to do with that or Bluetooth in any of its marketing materials. But new rumors a turning up all the time.

Today Nate brought up a couple of other new rumors, including a post on a German blog that, as nearly as I can make out with the help of Google Translate, found a “Voice” directory on the Oasis’s storage including the English text-to-speech voice Salli, which is currently used in Amazon’s Fire tablets for text-to-speech reading. There’s no sign of read-aloud functionality in the Oasis itself yet, nor does it have a headphone jack or speaker—so if text-to-speech does end up being used, it will have to be via Bluetooth, or perhaps via a replacement cover that integrates a speaker via the charging connector.

In other news, a Mobileread user who got his Oasis a day early found that the Futura and OpenDyslexic fonts were missing from the Oasis as shipped, but there was a firmware update, 5.7.4, that restored them. My Paperwhite downloaded the same firmware update all by itself last night (or at least, one with that identical version number), but I didn’t notice any changes when it started up again. There hadn’t been any missing fonts before, and there were no extra ones now. (So no Ember, alas.)

So, what’s the deal with the mysterious Salli voice file? I have a theory. Remember Google’s new Pixel C tablet, with its odd square-root-of-2 aspect ratio that would let the screen split into two smaller screens with the same aspect ratio? This would have supported a screen-splitting feature seen briefly in the developer preview of Marshmallow, but was later removed and pushed back until Android N. Google never advertised that its Pixel tablet would support screen-splitting, but that aspect of the hardware shows it was obviously meant to. (And when N comes out, it will.)

Perhaps something similar is at play with the Oasis. For $290, the new reader seems remarkably underwhelming when it comes to features. A better-lit screen, detachable battery, physical buttons, and accelerometer screen flip are nice, but are they really worth such a price premium? Amazon has done its best to spin the Oasis as a new “designer” reader, and judging by how well it’s sold seems to have done a bang-up job so far.

But what if the Oasis was originally designed with more features to be worth the extra bucks, but they simply weren’t ready for prime-time by the launch date? Maybe they were having a hard time making them work in firmware, or the new hardware wasn’t ready yet. Rather than push back the launch, Amazon might simply have obliterated any mention of them from the marketing material and simply worked extra-hard to promote the aspects of the Oasis that were ready as being worth spending the extra money.

But those hardware rumors (and now the mysterious Salli) suggest that the Oasis might very well still have some new hidden gimmicks to unfold. If Amazon is able to work the kinks out, it gets to announce that the Oasis now has this amazing hidden value that it never mentioned, and maybe even sell a boatload more of them. If the new features simply can’t be made to work, then there’s no loss; customers haven’t lost anything that was ever actually promised to them.

As for how the feature’s going to work, it puts me in mind of the speculation that the next super-thin model of iPhone will drop its 1/8” earphone jack. In the last few years, Bluetooth devices have gotten cheap enough now that you can actually get a decent pair of Bluetooth earbuds for about $25, little more than plain vanilla wired earbuds cost. By the same token, there are cheap Bluetooth speakers out there all over the place, including AmazonBasics models. And that’s not even getting into Amazon’s own Echo and related models.

So, why add even more to the cost (and, more importantly, the bulk and weight) of the Oasis by building in an earphone jack, or a tinny little speaker no one can actually hear from more than a foot away? If they could put Bluetooth on a chip, and hook into the ubiquitous external earbuds and speakers now easily available, so much the better. Plus, it would buy time in that nobody would expect their newest Kindle to come with text-to-speech, so they would have more time to make that aspect work right.

This is all just a guess, of course. And nothing could come of it. It’s possible Salli is just some random leftover from incorporating other features into the Oasis, and wasn’t meant to be there in the first place. But it seems unlikely. I expect we’ll just have to wait and see what turns up.

I do know this—given how long and hard David Rothman has agitated for Amazon to bring back text-to-speech back to the Kindle, he’ll feel quite vindicated if it turns out it actually has. Now if only they’d do something similar for all-bold reading fonts…