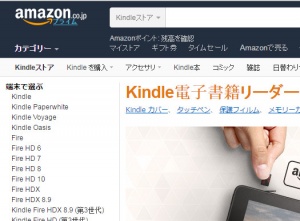 “Kindle Oasis.” Could that be the name of the new deluxe e-reader that Jeff Bezos tweeted about? And will it be waterproof?

The left image was up for a stretch at Amazon’s site in Japan, on a page advertising accessories.

Notice, too—the reference to a “Kindle Voyage”? Not Voyage 2 but simply Voyage? 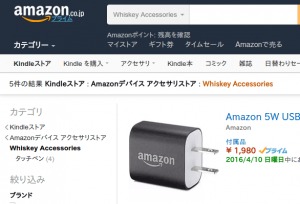 Granted, an Amazonologist at MobileRead has also shared with us an image with the words “Whiskey Accessories.” “Whiskey” is supposed to be only a code name for the new model. But who knows?

Over at The E-Book Reader, Nathan now is betting on “Oasis,” and that looks plausible to me. Could this mean waterproofing, just like the Kindle Aura H2O and the Nook GloLight Plus? Hard to say. Nathan says yes. To me, however, “Oasis” suggests the presence of water rather than its absence, and when it comes to the innards of a Kindle, you definitely prefer the former.

Given all the rumors about an optional solar-charged cover—or at least a case that can retain a charge from a conventional power source—“Oasis” could also suggest something power-related in my opinion.

Perhaps I’m being wishful, but text to speech, perhaps via Bluetooth, is on my own “most likely” list along with waterproofing and the solar-power option and the real page turn buttons (as opposed to the crappy “haptic feedback” on the Voyage).

So what about Liquavista? Perhaps. It might well be color, given the rumored existence of cover/chargers. Black and white Liquavista with still images could be pretty thrifty with power if you keep down the refresh rate. One of the Japanese images shows a stylus within “Whiskey” accessories, suggesting that if this Liquavista, maybe Amazon will indeed blur the line between e-book readers and tablets. For more on Liquavista, check out some related YouTubes.

Adding to the fun, a MobileRead poster, Nate and others are reporting the possible existence of a new basic Kindle called Woody. Perhaps with accelerometers and  a return to real page turn buttons? And new storage wrinkles? And able to run the Paperwhite’s firmware?

Update, 1:01 p.m.: So if the next Kindle is waterproof, will the swimming pool and the Kindle Girl return? She splashes water over the guy’s iPad?

Related: Amazon to offer whisky soda with new Kindle, solar case: WSJ, by Paul St. John Mackintosh. Also see The case for buying a Kindle Voyage e-reader NOW—if that’s what you want and Kindle Voyage 2 is unlikely in 2015, but the game isn’t over.