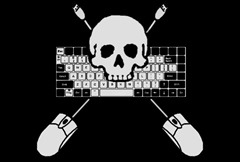 15 years ago, during the height of the Napster hearings, Lars Ulrich testified before the Senate Judiciary Committee of his concerns that Napster was going to set off a “creative apocalypse.” How were people going to afford to be able to continue making art, he asked, if people just wanted to download it all for free?

It was a good question in its day, but reality proved to be more complicated than Ulrich feared. Napster was only the beginning, and within just a few years there were a half dozen different methods of piracy, covering not just music but books, movies, television, and video games. Most of those have faded away, but BitTorrent soldiers on. For a while, people were pirating like crazy, and a lot of them still are. Yet, artists still seem to be able to earn a living. How?

Steven Johnson has a feature in the New York Times Magazine looking at that question. Just how much of that “creative apocalypse” has come to pass, and why hasn’t the rest of it?

At first glance, it looks like we’re living through the dark times Ulrich predicted. We’re all paying a lot less for media now, with streaming services supplying music and video for a low monthly fee, e-books costing a lot less than hardcovers (or a huge lot less, if you’re talking self-published), and (though Johnson doesn’t really go into this) video games frequently super-cheap on Steam and similar services. Apocalypse now?

The problem is, a lot of the concern over modern-day starving artists is anecdotal. We hear individual horror stories, but on the whole the industries seem to be doing pretty well. We can still get all the music, music, television, books, and games we want—so where’s the big crash?

Johnson takes us through his research to find out. He crunches numbers from the Department of Labor’s Occupational Employment Statistics from 1999 and 2014 to compare any changes, and finds that most creative fields have seen their average income increase, in most cases faster than inflation. The biggest shift has been in the music industry, where the majority of income used to come from recorded music, but now it comes from live performances.

Another big change is that production costs across all industries have basically plummeted. For a few thousand dollars, musicians can set up home studios that used to require corporate backing. Moviemakers can film shots with drones and digital cameras that used to require helicopters. And self-publishing finally coming into its own has enabled authors to move beyond needing publishers and do it all from their computers.

Quality doesn’t seem to have suffered a great deal from then to now, either, if you look at the numbers. Johnson reels off names of hit movies from the turn of the century and today that seem to be about equally good and have done equally well.

As for books, Johnson does find that books seem to be spending overall less time on bestseller lists—though they’re spending slightly more time than before on the American Booksellers Association list even as they fall off the New York Times list faster. Johnson posits:

The numbers seem to suggest that the market for books may be evolving into two distinct systems. Critically successful works seem to be finding their audience more easily among indie-­bookstore shoppers, even as the mainstream market has been trending toward a winner-­takes-­all sweepstakes.

I think it’s also worth pointing out that the New York Times keeps changing the way it does its lists—for example, right at the start of the period he’s examining, it split off children’s books to get away from the scourge of Harry Potter, and just now it’s made some further changes to children’s books—but then, he’s writing for the New York Times, so he could be excused for being too close to the trees to see the forest.

Johnson doesn’t fail to notice the renaissance in independent bookstores. though he probably overstates the case in theorizing that they serve as a local “literary community.” These days, most people who want media “communities” of any kind generally seek them out on-line.

In conclusion, Johnson posits that the big reason there hasn’t been a “creative apocalypse” is that people are still willing to pay for creative works. There may be shifts in how they do it—paying more for live music than recorded music now, for example, or taking advantage of new content-delivery platforms—but they still do it. There are new revenue streams from new media, too. Art costs a lot less to create, and independent publication is easier than ever before. (Indeed, some people who feel driven to piracy these days do so only after being unable to buy the works they wanted.)

The story has gotten a fair amount of notice among new media blogs. On Techdirt, Mike Masnick crows about how people are finally starting to notice what he’s been predicting for years. Not a whole lot surprising there.

The NY-centrism reflected in the quote – I write for people who are just like me or who want to be just like me – is probably harmless at the NYT (although PG understands that circulation and profits continue to decline). However, the NY-centrism of the traditional publishing business is one of its greatest weaknesses. For one thing, most of the people reading the manuscripts and deciding which ones to publish for NY publishing are substantially disconnected from most of the book-reading public.

This isolated viewpoint is what makes the New York-centric traditional publishing community so poorly prepared to take on Amazon, PG posits. They live in a world of distributors and bookstores, and aren’t equipped to compete in the new reader-driven world of the Internet and Amazon.

That may be the case. But I’m impressed that as old-school a publication as the New York Times was prepared to go as far as they have in seeing how the new world works for creators and artists, and that it isn’t just a piracy-haunted wasteland. Who knows? Maybe if they’re willing to come that far downstairs in their ivory tower, there might yet be hope they’ll come down the last few flights of stairs and join the real world.