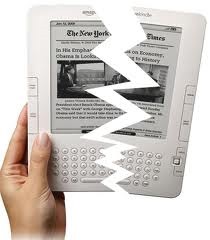 Found via Slashdot: Larry Press plaintively wonders why nobody’s come up with a “Kindle Killer” yet. He notes a whole host of ways the Kindle falls short of perfection—lack of voice recognition or full interface capability with a computer, for example—and thinks such a device really should be a “low-hanging fruit” for one of the big device makers.

I’ll tell you why, Larry. The demand isn’t there. Maybe folks like you who like to get the most out of their devices would want such a thing, but the vast majority of the lowest-common-denominator general public—the ones who actually buy the devices in bulk—are happy as hogs in a trough with their Kindles the way they are, or else they wouldn’t be as popular as they are.

I don’t think Amazon gets nearly enough credit for the amazing thing it did with the Kindle. It’s one of those things that looks easy, because it made e-reading easy. But how many of you remember what e-reading used to be like before Amazon came along? You had to piddle around with side-loading stuff onto PDAs or e-ink readers, hooking them up to the computer, using conduit software to pipe the stuff on, and so on and so forth.

That was fine for computer nerds and early adopters, but the average person doesn’t even understand what all the buttons on his TV remote do. He might know how to turn his computer on, send email, write letters, and surf the web, but anything beyond that might as well be a Masonic secret mystery.

(You might find that hard to believe; if you’re reading this blog, you’re probably clued in enough about computers and e-books to be able to do most of that in your sleep. The thing is that a lot of people tend to overestimate how easy it is for other people to do things that are easy for them. This is why the ability to do tech support is such a rare skill. It’s hard to put yourself in the shoes of someone who might not be able to figure out where the proverbial “any” key is. Trust me: you have no idea how exceptional your computer skills make you compared to most people in the world.)

And then Amazon came along, built cellular connectivity into its Kindles so you didn’t even have to figure out how to connect them to wi-fi, and made it so you click a button, you get a book. Boom. Dead simple. Anyone can do it. And Amazon was the first to make that possible. Anybody else could have done it, if they’d thought of it, but they didn’t think of it. Jeff Bezos did, and the first-mover advantage was enormous.

And that, more than DRM, is what keeps Amazon at the top of the heap, with the huge market share it has. Baen has never used DRM, and has always sold its e-books in a Kindle-compatible format. It even posted instructions to its web site about how to load the books onto the Kindle, and made it so people could use a web form to email books they bought directly to their devices without ever having to hook the Kindle to their computer.

They still got complaint after complaint from Kindle users that their e-books “aren’t on Kindle.” Because for so many of that lowest common denominator crowd, if they can’t click on Amazon’s built-in Kindle store to get it, it doesn’t exist, no matter how DRM-free it might be.

Eventually, it got to where Baen recognized it was losing more money by not being in Amazon (and other one-click convenience spots B&N, Kobo, Apple, Google), even with the chunk of revenue Amazon would take for its margin, than it was gaining from selling to just those computer nerds and early adopters who were willing to do more than just click a button. So they changed the way their entire Webscription store worked to get their books there.

So, no, it’s not DRM that keeps users locked into the Kindle store. It’s a contributing factor, but it’s not the only factor. (Indeed, many Amazon customers might not even know or care whether any given book is DRM’d at all. Either way, they download it, they read it on their approved Kindle devices or apps, and they’re happy.) If all the publishers stopped using DRM tomorrow and set up stores of their own to bypass Amazon, I’ll bet the vast majority of Kindle-owning customers would still buy from Amazon anyway. And if a given publisher dropped Amazon in favor of its own DRM-free store (or for that matter Amazon dropped them), those readers would complain to the publisher that they’re “not on Kindle” and just wouldn’t buy those e-books.

(It is worth noting that the one-click convenience isn’t the only perk the Kindle offers, either; it also includes value-added gimmicks like the “Whispersync” function that keeps track of reading position from device to device, and even from text version to audiobook version if one owns both, for books and audiobooks bought from Amazon. But those are just the icing on the rich, moist, one-click-convenience-shopping cake.)

Of course, that also suggests that the best way to “kill” the Kindle—get customers to abandon the platform—might just be for all the Big Five publishers to pull all of their books out of Amazon altogether. If customers couldn’t buy any of the Big Five e-books from their Kindle, how long would it be until they migrated to some other platform?

But given how much of Big Five sales Amazon accounts for (to the point where they can throw a publisher into a tizzy just by removing pre-order buttons because the publisher actually has no way of compensating for that in its demand calculations), it doesn’t seem likely they’d be willing to risk the effects of going cold turkey.