It’s no secret that academic publisher Reed Elsevier is facing financial and structural challenges from European Union and other regulatory challenges to its business model, from officials anxious to make sure that publicly-funded research gets to be public. But Elsevier’s response to recent attempts within the academic community to assert open access has highlighted characteristic problems in its own reactions to this challenge – and similar behavior among academic and scholarly publishers elsewhere. 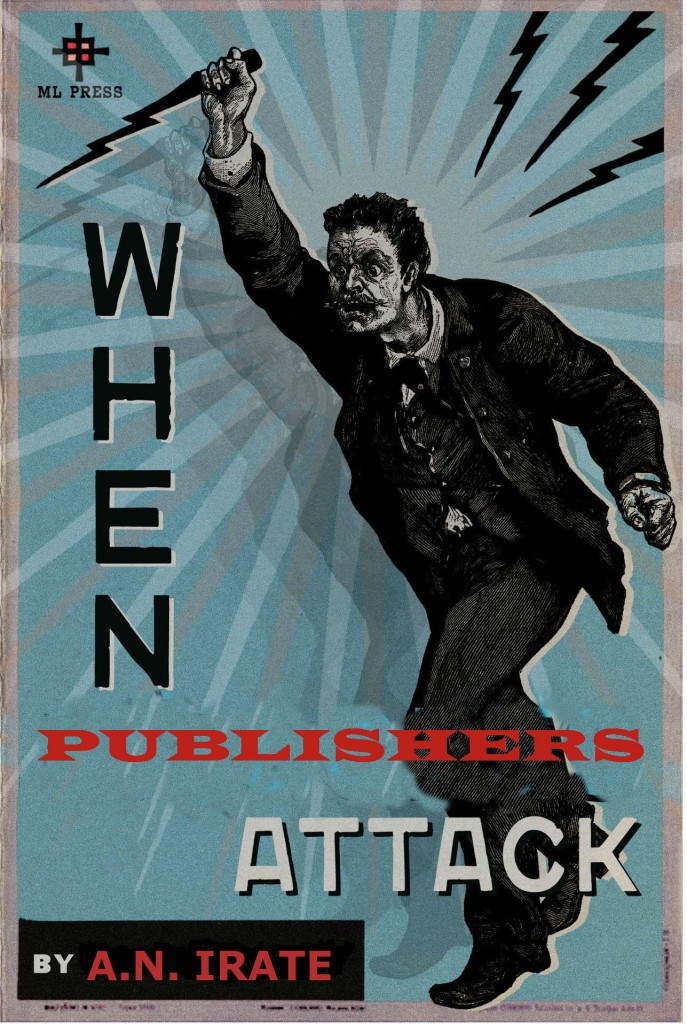 And by the way: The tongue-in-cheek illustration that accompanies this post is just that – tongue in cheek. But only so far. It doesn’t represent all publishers. But it represents enough. And I hope that the publishers who don’t deserve this will not feel implicated – but will feel shamed, or at least upset, by the actions of their peers.

Mike Taylor, “a research associate at the University of Bristol,” and his academic partners run a blog called “Sauropod Vertebra Picture of the Week.” When not concerned with matters of pressing international concern, like – well, sauropod vertebra pictures – the blog addresses issues of open access within academic research and scholarly publishing. And the following is based mostly on SV-POW’s summary.

As one Tweeter posted, ” petty harassment like that makes me way less inclined to publish in an Elsevier journal.” And SV-POW’s Mike Taylor specifically cites this as ” another horrible example of how organisations that call themselves ‘publishers’ do the exact opposite of publishing.”

And the previous horrible example? Dating from April 2013, an account of “predatory publishers,” including in this instance, “Oxford University Press, Cambridge University Press and Taylor & Francis — three publishers who we’ve been used to thinking of as reputable, and who want researchers to think of them as trusted partners,” suing Delhi University for making copies of their publications for use in course work, despite the fact that Indian copyright law specifically allows such exemptions, and that many of the authors themselves have stated that they want no part in the suit, and that there is no possible revenue loss to the publishers, since the students could never buy the books anyway.

As SV-POW puts it, “pretty vile behavior there by the publishers, who apparently consider maintaining total control more important than education in a developing country that desperately needs it.” I couldn’t have put it better myself. And I don’t need to. Because this is a battle that academics and governments are now fighting against publishers. Hard to imagine any of them acting as fifth columnists for the Bezos Evil Empire, no?

And SV-POW puts the conclusion very succinctly: “Dear publishers: if you don’t want to be called enemies of science, stop being enemies of science.” So these self-styled temples of learning, culture, and intellectual standards are in fact acting as the enemies of knowledge. Repeatedly. Fabulous work, guys.

As the UK government itself, in the person of science minister David Willetts, said back in May 2012, “to try to preserve the old model is the wrong battle to fight. Look at how the music industry lost out by trying to criminalise a generation of young people for file sharing.” And whatever my opinion of the current UK government and its policies on libraries, etc., I do not think Willetts was acting as an Amazon sock puppet in saying this. I thoroughly recommend the text of his entire speech for an overview of the issues.

To reiterate: This is absolutely not all publishers. Callie Oettinger has just shared an article that is practically a love letter to the business model of O’Reilly Media, which serves exactly this community, and is apparently thriving under the new dispensation. Time for others to get the message. Before they bring the entire profession into disrepute any more than they have done already.