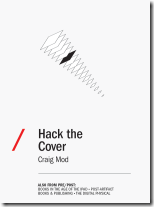 Craig Mod, a writer and designer who was part of the original Flipboard app design team, has written a very interesting discussion of what book covers were originally meant to do, and what to do with “covers” in the age of the e-book. It’s a very long and thoughtful piece (with footnotes), and points out that covers came to be as they are because of function dictating form.

Physical book covers exist for a reason, Mod writes, and that reason is to protect the book’s interior, but also to attract the reader’s attention and also to set expectations and frame of mind for what will be found inside.

But what can be done with covers in the world of e-books, where they are often limited to black and white by e-ink technology, and are almost never seen at all since the Kindle and a number of other e-book readers and apps open automatically to the first chapter? And what can e-book designers do to duplicate the more esoteric functions of the cover—the setting of expectations and frame of mind?

Mod looks at the way e-book covers are frequently shrunk into icons for screen display, or can vanish amid the text of individual item listings on Amazon. He points to examples of some covers, such as O’Reilly’s, that manage to work pretty well when shrunk to icon size (because large design elements remain visible). And he talks about ways of “hacking” the cover art, such as updating covers of already-published books to “ping” readers that new related books have just been published.

He also suggests that designers should design the interior of e-books with a cover design sensibility—design as if every page is the cover. Mod uses four books he’s designed as examples, noting of them:

If you open any of these books without looking at the cover, you’ll notice they each have a unique and confident visual identity. Through typographic, illustrative, or layout choices I attempted to string a common thread between the cover and the interior. In doing so, the cover, as it were, is everywhere.

The essay is long and fascinating, well worth reading in its entirety. It provides a lot of food for thought, and reminds us that the cover has a lot deeper function and meaning than being just the picture on the front of a book. I think it’s great to see someone thinking seriously about the implications of these things. Perhaps we e-book fans don’t generally pay a lot of attention to covers, but essays like this show that there might just be more to them than we realize.