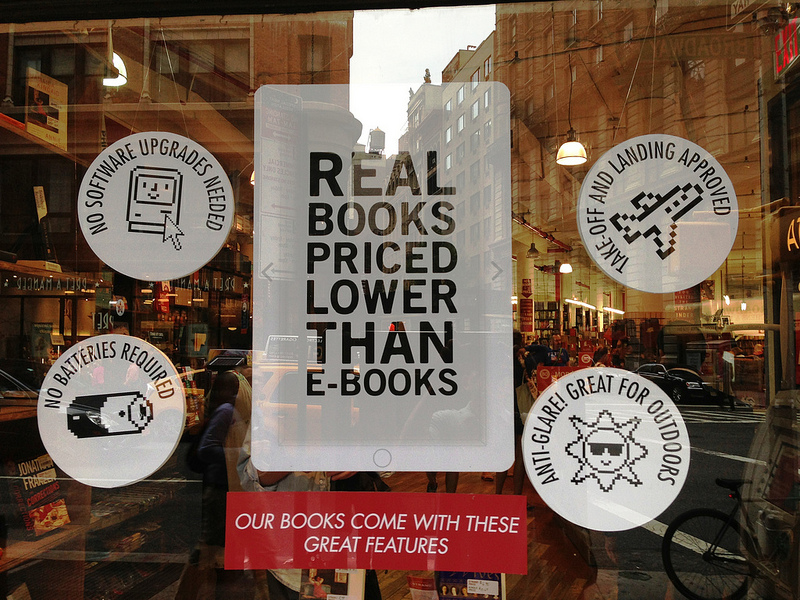 Avi Solomon snapped this pic of the window display at NYC bookstore The Strand lauding the virtues of their “Real books priced lower than ebooks,” including the fact that you can read them during take-off and landing.
* * *

10 Forgotten Classics You Need to Read (The Huffington Post)
They are called classics for a reason, as I discovered after reading about 400 novels for my new book, The Novel, An Alternative History: 1600-1800 (Bloomsbury). Thousands of novels were published around the world during these two centuries as it gradually overcame poetry and the drama to become the dominant literary genre.
* * *

Move over Pebble: Ubuntu Edge hits new record in crowdfunding (CNET)
There’s a new crowdfunding champion in town. The Ubuntu Edge, a smartphone from Canonical that’s designed to take on Apple’s iPhone 5 and the Samsung Galaxy S4, hit a record for crowdfunding, reaching $10.4 million on Friday.
* * *

Neil Gaiman to Appear at Road Naming Ceremony (MediaBistro)
Newbery Medal-winning writer Neil Gaiman will get a road named after his most recent novel. The bus lane, west of Canoe Lake in Portsmouth, will be christened The Ocean at the End of the Lane in honor of Gaiman’s latest adult novel. The naming event is scheduled for 3 p.m. on Sunday, August 18th.
* * *

Millions Qualify for E-Book Refunds (Publishers Weekly)
The $166 million publishers have agreed to pay to settle e-book price fixing charges with the states and consumer class could soon begin flowing to consumers, and PW has learned that more than 23 million consumer accounts are eligible to receive refunds.
* * *

Kindle Daily Deals: “The Courtiers” by Lucy Worsley & “Earthlight” by Arthur C. Clarke (and 2 others)