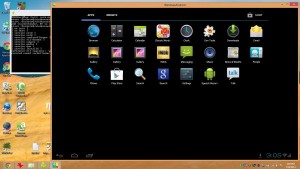 OK, folks—this is something seriously cool. Over at The Next Web (and Liliputing, and probably a million other tech-obsessed sites and blogs by the end of the day), there’s a recently-published post about a new app known as WindowsAndroid that actually allows you to run an Android operating system (Ice Cream Sandwich 4.0, to be specific) “as a native application on your Windows Vista, Windows 7, or Windows 8 machine,” according to the TNW post.

A Beijing-based startup called SocketeQ is the company responsible for the app; you’ll want to head over to their site in order to grab the download form and installer, both of which you’ll need if you want to get started. (“The whole process of signing up, downloading, and installing should take you less than 15 minutes,” according to TNW reporter Emil Protalinski. “If you don’t have a touchscreen, you can use your mouse to navigate the interface.”)

And just in case you were curious, Protalinski poins out that WindowsAndroid offers an experience far superior to that of the similar service offered by the Bay Area-based BlueStacks. Why? “WindowsAndroid allows you not only to execute Android apps on your Windows computer,” says E.P., “but also use the browser, not to mention every other component of the operating system.”

I haven’t actually gone through the installation process yet, but if anyone out there has, we would genuinely love to hear your thoughts. Thanks in advance.

Also, if you’d like to have a rough idea of what this process might actually look like on your own machine, here’s a Chinese-made video (linked to from the SocketeQ site, so I’d assume it’s safe) that shows the porting of Android 2.3 to Windows 7.