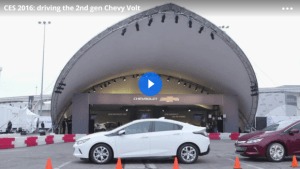 Tired of pathetic e-reading software from Amazon, especially if you’re past the novice stage? Maybe you should ask General Motors to buy out Jeff Bezo’s e-book side.

Let me explain. GM has a market cap of $47 billion. Amazon’s is $287B. Nevertheless, here’s a modest proposal for GM at least to try to gobble up the e-book side and apply the same level of innovation it has in coming up with improved electric cars and gas-electric hybrids.

Read Ars Technica and click on the accompanying video; and also see earlier coverage there and on CNET, as well as GM videos (scroll down). Fully charged, the Chevrolet Bolt EV can go 200 miles, a major boost made at the urging of customers. Get near the EV and, GM says, your smartphone can connect automatically. Cost is $30,000 after government incentives, well below Tesla’s (granted, the EV isn’t in the same luxury class).

Mind you, innovation is not 100 percent AWOL at Amazon. TeleRead has been at the head of the fanboy pack in praising the $50 Amazon tablet’s potential for e-reading, at least with third-party software able to display a wide variety of fonts. I’ve been the biggest booster of them all. Low pricing is innovation. I’ve even won over the previously skeptical Joanna Cabot.

Still, despite the quality of the hardware in most cases, Amazon year after year keeps on offering variant of the same dumbed-down software for e-reading. An advanced mode, providing for such extras as all-text bolding capability, would be a cinch for Amazon to add. Meanwhile just look at what Moon+ Reader Pro can do compared to Kindle e-reading software. Moon’s resources are a speck of Amazon’s.

Now compare Amazon’s laziness here with GM’s diligence in coming up with better versions of its electric vehicles and hybrids. From Ars: “The first-generation Volt taught Chevrolet quite a lot about electric vehicles, and its enthusiastic fan base provided the company with a lot of feedback that has been incorporated into the new car. The interior is much-improved, as is the powertrain, which is both lighter and more powerful than before. The car combines an electric motor and 18.4 kWh battery with a 1.5L direct-injection gasoline engine that exists mainly to charge the batteries but which also sends power to the front wheels when it makes sense to do so.”

Watching the CNET video, you’ll see the level of customization that GM allows in its dashboard display. Why doesn’t Amazon care as much about letting users optimize their Fire and Kindle views? Sure, you can talk about blue light filtering and speed reading and other wrinkles Amazon now includes, but it has been embarrassingly smug about  basics such as fonts choices.

Traditionally we think of high tech companies as energetic, bold and disruptive, and Amazon has laudably been that way in areas such as drones. When it comes to e-reading software, however, Amazon is snoozing away.

Don’t say, “Well, zillions of people are Amazon e-book customers, so how bad can the software be?” Point is, they’re customers because Amazon’s prices are reasonable and the inventory is vast, far ahead of the fifth-rate competition from Barnes & Noble (whose e-reading apps, by the way, are even worse than Amazon’s).

More importantly, they aren’t bothering to articulate their needs for better software options for advanced users. They just quietly end up relying on Amazon products less than they could. Meanwhile the e-book business isn’t growing as rapidly as before. And more attention paid to e-reading software could help give it a shot in the arm, especially if Amazon remembered that today’s novices will be tomorrow’s advanced users. By KISSing away, Amazon limits the market for its wares.

One reason for Jeff Bezos and the rest of Amazon to care more about e-reading apps: Kindle software could be embedded in cars (perhaps even happening now or about to happen). For safety reasons, no, I’m not worrying about fonts for the driver when the automobile is in motion; TeleRead readers already know how I feel about distracted driving. But how about the best possible interface for stationary use and audiobooks?

Note: Zero GM connections here, financially (although I certainly wouldn’t mind advertising from GM in the future). In fact, the company for years was near the top of my S list after it risked my life with its crappy Citation that stalled at intersections.  For all I know, GM still has issues. But here, at least, it is doing what Amazon should be doing with its e-reading software. Innovating in the most meaningful of ways.

Note #2: In one version of this post, Joe Wikert’s byline accidentally went on. Joe is innocent! All opinions here are mine. Joe had nothing to do with this essay. I have no idea of where he would stand on the issues discussed—although I’m confident he would favor a KISS default mode for the Kindle and related apps. So would I. We’re talking, rather, about options tucked away in a menu for veteran users.