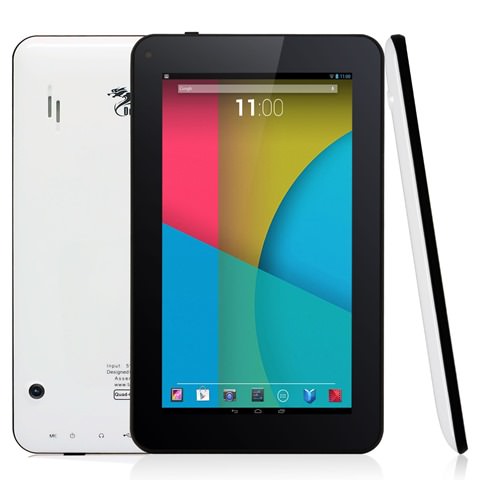 Update: In light of recent developments, I can no longer recommend you buy any cheap Chinese OEM tablet, especially not those by the brand name of Allwinner. Security researchers have discovered many cheap Chinese OEM tablets contain malware. If you’re going to get a cheap Android tablet, make sure it’s a name brand, such as Asus, or an Amazon Fire.

On the Yahoo Kindle Korner mailing list, TeleRead commenter Barry Marks pointed to this $40 GameStop exclusive Asus MeMO Pad HD 7 tablet. Unfortunately, by the time I checked it out, it had already sold out online—not surprising, given that it’s normally $150 and has considerably better specs than the $10-more Fire. (By the same token, there’s an 8” version for $50, also sold out.)

There don’t seem to be any other good cheap Android deals on GameStop right now; there is a refurbished 2013 Nexus 7 for $90 but it seems to be limited to in-store stock only. Of course, tablets are mature enough that sooner or later pretty much any expensive tablet will be available refurbished, or go on sale or clearance. But there are alternatives if you’re looking for something right now.

If you search on “Asus MeMO Pad 7” on Amazon, you’ll find a number of refurb and new tablets, starting at $70 and up. Of course, those are the 1024 x 600 version, not the 1280 x 800 version GameStop had. But even so, that’s still the same resolution as the $50 Fire, and this is a name brand (though the cheapest ones will be refurbished). Asus are the company that actually made Google’s Nexus 7, after all. If you limit the search with the 1280 x 800 checkbox, it looks like the cheapest Asus is about $100, and they only have one of those in stock.

But what if you don’t mind low-end, don’t care about brand name, and just want something with specs and price roughly comparable to the new Fire but that can run plain-vanilla Android? There options here, too.

One of my Facebook friends was looking for an inexpensive Android tablet that his daughter could use to play Monster Strike, which was about to render her iPhone 3GS obsolete. He settled on the $55 Dragon Touch M7 (pictured above), a 7” quad-core tablet with 1 GB RAM, 8 GB storage, and a 1024×600 IPS display—all comparable to the $50 Fire. It even uses the exact same 1.3 GHz Mediatek 8127 processor as the Fire. Like the Fire, it has a micro-SD slot—though unlike the Fire, it can only support the SDHC standard of up to 32 GB, whereas Amazon went the extra mile by supporting the SDXC 128 GB version.

And scrolling down to the “What other items do people buy after viewing this one” section shows an 8” version of the Dragon Touch for $80, a similar 9” quad-core 1.3 GHz tablet from Kingpad for $60, and a 7” NeuTab N7 (which looks like it’s built in the same case as the Zeepad I used to have) with a slower 1.2 GHz Allwinner quad CPU for $50. There’s also a 7” Dragon Touch with the Allwinner 1.2 GHz processor for $45. All of these have Android KitKat, and some of them can be upgraded to Lollipop. All have pretty good aggregate review scores, too.

Even though these are all cheap no-name Chinese OEM deals, it may be that the $50 Fire isn’t as unique as you might expect. We can suppose that Amazon, with its habit of cutting hardware margins close to the bone, throws in some better hardware and build quality for that $50 than the similarly-priced tablets in that range—but on the other hand, you’re paying for the brand name, too, and how much better could a tablet in that low of a price range be regardless of profit margin?

Regardless, if you’re in the market for a cheap Android tablet but don’t want to be restricted to the Amazon ecosystem, it sounds like you’ve got a number of choices. They may not be significantly better than the Fire—but they may not be all that much worse, either. And either way, you’re not out a lot of money to find out.

(And if you should decide to buy one of those tablets, please be sure to use one of the links from here? Anything you buy after clicking one of our Amazon affiliate links will give us a small percentage without costing you anything extra.)