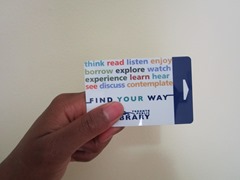 We’ve been covering the e-book pricing issue facing our public libraries for some time. Well, in my area, the debate over library e-book pricing seems to be heating up. As The Star explains:

Last summer, four Canadian public libraries began pushing for change; since then, their group, Canadian Public Libraries for Fair Book Pricing, has grown to include 29 systems. Libraries say demand for their eBooks has grown 1,200 per cent since 2009, and meeting that is denting their budgets.

I’m pleased to see this issue picking up steam. It does seem fair to charge a library more than a single customer would pay. Multiple people will read that library book, and unlike a paper copy, it won’t wear out or suffer damage. At issue here is how much more though. Libraries do have a finite budget to spend on these things, and the drop of the Canadian dollar has influenced the market in Canada even more.

When HarperCollins first announced that they would expire library books after 26 loans, I thought that was an absurd proposition. But on reflection, I like that idea. It does account for the ‘e-books don’t get damaged’ argument by building in a ceiling on borrows which accomplishes the same effect. But it also would allow publishers to offer a reasonable price. I think an e-book which costs a lot more would be less appealing to libraries, even if it never did wear out.