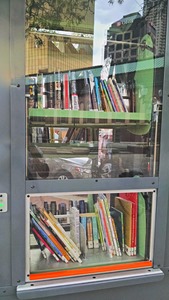 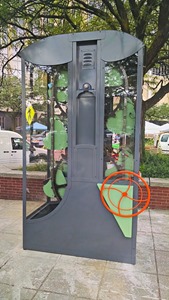 I don’t often run across TeleRead stories in person, though it does happen from time to time. Oddly enough, the story I came across lately actually happened in the very same spot as that one, Monument Circle in downtown Indianapolis. Or at least part of it did. I stumbled onto a brilliant new art installation program in downtown Indianapolis called The Public Collection, designed to make books freely available to the general pubic, modeled after the “Little Free Library” project but on a much larger scale.

It all started Wednesday morning, when I visited the YMCA on Market Street that incorporates a bicycle shop, to check on the status of repairs to my e-bike. As I came out, I noticed that the weekly Farmer’s Market was in full swing—but I noticed something else, too: a big green box with a red crank on it. Looking closer, I discovered it was an art installation that was full of books, on a Ferris-wheel-like rotating shelf system. You turned the crank, and as long as the door was closed, a stepper motor would rotate the assembly so the next shelf came into view. Then you could open the shelf door and grab a book. It was a clever idea, and there was a sign next to it declaring it to be called “Harvesting Knowledge,” part of “The Public Collection.”

A little later that day, I was having lunch at Scotty’s Brewhouse, a few blocks away, and I noticed that some kind of art installation they were installing outside that—something that looked like wicker, only made out of metal—also had shelves with books in it! What was going on here?

The sign next to “Harvesting Knowledge” had mentioned it was being supported by the local public library, so I called their public relations department to find out. I learned that The Public Collection was a two-year program intended to support literacy and art appreciation in the Indianapolis Community through making books freely available to the public at eight art installations all around the downtown area. I also learned they were having a grand opening ceremony the next day on Monument Circle, so I made plans to attend. 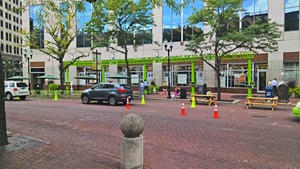 The grand opening ceremony was held at the site of yet another art installation, called “Monument”—a huge assembly of bright green Greek-style columns with their own rotating bookshelves built in, and a Mark Twain quote overhead. There were a series of speakers, including the project’s coordinators, architects, and even Mayor Ballard. They explained that the project had been inspired by another art project that brought ten Little Free Library art installations to New York City. They wanted to do something similar, to demonstrate that art was for everyone while at the same time doing something about the imbalance in terms of the availability of books to the community. (Special thanks to BoingBoing for linking to that story when they linked this one, so I could come back and update this section—I’d been unable to find it on my own.) 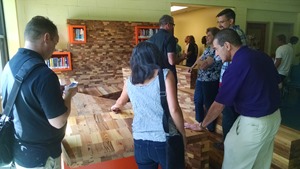 We talk a lot about the “digital divide” here on TeleRead, but they reminded me that there’s an analog divide, too. In thriving middle-class communities, there are an average of 13 books available per person—but in less well-off communities, there are an average of one age-appropriate book available for every three hundred people. And as The Public Collection’s blog points out, Indiana has an 8% illiteracy rate—nearly one in ten people can’t read. The Public Collection intends to try to remedy that a little.

Studies have shown that ready access to the printed word not only improves children’s reading performance and helps to teach them the basics of reading, it also improves their attitudes about reading and causes them to read for longer periods of time. Nationwide, however, almost two-thirds of low-income families own no books of their own. 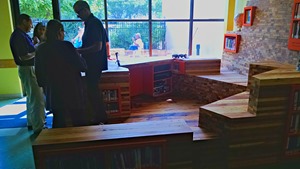 Project creator Rachel Simon and Mindy Taylor Ross of Art Strategies LLC decided to do something about this. They launched The Public Collection, reaching out to local artists to come up with ideas for art installations in the public space that could house books that would be free to everyone. The Indianapolis/Marion County Public Library would curate the collection of books for them.

Each installation was a different art project, and each one was located in a different public space. Some of them were open commons areas, such as the ones I’d seen so far that day. One was in a hospital, and another was in Horizon House, a local homeless shelter. One of the architects mentioned a reception was being held there later that day, so after the event at Monument Circle was over, I headed over that way. 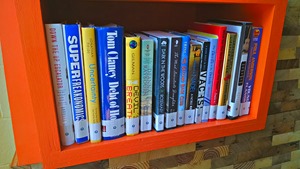 The installation at Horizon House is called “Table of Contents,” made of reclaimed wood from buildings that were being torn down. Even as all the art projects serve the dual purpose of being art and providing books, this one had several more purposes than that—it was made in the shape of a stage that could host readings, had speakers and audio equipment, and also had table and seat surfaces built in. Rather than just paper books, it also had a collection of audiobooks.

Here I spoke to Joshua Coggeshall, one of the architects, who explained a little more about the project and how it had been designed. He went into a little more detail about the design and the different purposes, as you can see from the embedded video below. 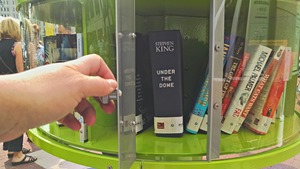 I chatted with a few other people at the site as well, including other architects and artists and a man who would be offering reading classes. The shelter’s residents were happy about the new addition. One even noted that the library curating it would try to fill requests for specific books if they could. I also spoke to Leslie V. Kelly, Director of Programs for Horizon House, who also was excited at the new facilities. She noted that a lot of homeless people weren’t as well-served by traditional libraries, having trouble maintaining the identification necessary to get a library card—but something like the Public Collection installations, both in Horizon House and elsewhere in the community, wouldn’t have that problem. 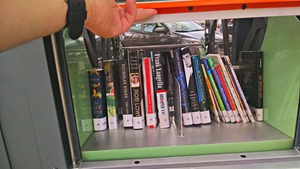 I think this program is great. I really like art that is useful as well as decorative, and this is that in spades. Plus, we haven’t had anything like it in downtown Indianapolis up until now—there are some Little Free Libraries in town, but not many of them anywhere near the downtown area. And these are basically big free libraries—they can hold dozens upon dozens of books, considerably more than any single LFL installation.

Another thing I noticed was that their collections are full of books people would actually want to read, whereas with many LFLs it can be kind of a toss-up. (Not so surprising when you think about it, given that the local public library is curating it. Some of the books are even marked as library discards.) There are many bestselling authors and popular titles present, for all genres and age groups—I even succumbed to temptation and snagged a couple of books myself (To Kill a Mockingbird, which I’ve always intended to read, and Scott Westerfield’s Leviathan, which I heard about during an IMCPL librarian’s presentation at Gen Con Trade Day). After all, they were right there. 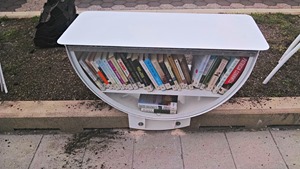 The great thing about this program is that paper books are something we do have a huge surplus of in society now, especially as many people as have turned to reading e-books. Hundreds of thousands or even millions of copies of popular titles are printed, and many of them end up collecting dust in bookstores, or donated to libraries. And libraries generally end up with considerably more books than they can use. Sometimes they sell them off at friends-of-the-library sales, but a better use to put them to could be putting them out there for people to read for free. And this is an area where they have it all over e-books, because e-books do require someone own a device for reading them—but paper books just have to catch your eye. 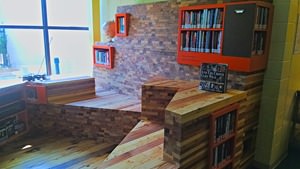 There are some aspects of them I’m not entirely sure I like—the way the bright green color of “Monument” kind of clashes with its surroundings, or the way “Harvesting Knowledge” only operates one-way, so if you miss a book you want you have to crank for several minutes for that shelf to make its way around again. And they’re not indestructible, either—even at the launch event, I noticed a couple of the workmen behind “Monument” had to repair one of the bookshelf doors with a little elbow grease because it had already gotten stuck. And they’re only guaranteed to stay in place for two years (though I do hope they become popular enough that there’s a clamor to keep them).

But, really, the purpose of art isn’t to be universally liked, it’s to inspire comment and discussion—and, in this case, to promote literacy and the love of books. And they seem to have the latter part, at least, down cold. I haven’t exactly had a long time to observe these art installations, but one thing I have noticed over the couple of days they’ve been there is that it’s not uncommon at all to notice people seeing them and then stopping to browse the shelves and occasionally taking a book. I hope this doesn’t change as the newness wears off of them.

Whatever happens, it’s certainly going to be interesting to be around the public spaces now. I’ll have to try to visit more of these installations when I can find the time.