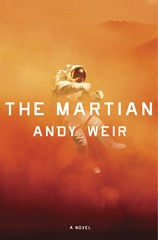 A new science fiction movie by a well-known director is on the horizon. Matt Damon plays an astronaut, stranded alone on a planet inimical to human life. It also features Jessica Chastain. While you might be experiencing some Interstellar déjà vu, I’m actually talking about Andy Weir’s breakout novel The Martian, coming later this year by Ridley Scott. An in-universe promotional video and the trailer came out a couple of weeks ago, and proved so popular that 20th Century Fox moved the release date up by two months.

But did you know that The Martian was a self-publishing Cinderella story that happened entirely by accident?

Andy Weir is no stranger to posting fiction on the Internet. He drew one of the earliest webcomics, Casey and Andy, which went to 666 strips. Later, he published a few issues of a “webcomic book” called Cheshire Crossing.

However, he’s also written a lot of prose stories and posted them to a section of his website. One of these was The Martian, a story about an astronaut who has a really bad day that ends up with him being stuck on Mars while the rest of his crew starts back on their way home.

The fans who read his stories really liked The Martian, and asked him to make it available as an e-book so they could put it on their Kindles. He did so—but then they asked him if he could actually put it on Amazon so they could download it from there more easily and not have to mess with sideloading it. He couldn’t post it on Amazon for free, and he wasn’t interested in making much money from it at the time, so he self-published and set it to the lowest price he could—99 cents.

Unlike John Scalzi, who posted his first book free online with the express intention of finding a publisher for it, Weir didn’t mean to become a self-publishing success. He just wanted to make it easier for fans to download his book to their e-readers. If it was worth a dollar to them to let Amazon do it, why not? And then, even though fans could still download the e-book from his site for free, the Amazon edition of The Martian almost immediately went into the bestseller lists, and then Random House came calling with a contract offer.

(This just proves my point yet again that Amazon has attained dominance in the trade e-book market simply by making it so easy to buy e-books from them. When you’ve got that many people willing to pay a buck just to avoid having to plug their device into their computer and copy a file from one folder to another—or even just attach the file to an email and hit send—really, it speaks for itself. How can anyone else hope to compete with that kind of setup?)

Of course, the only reason people went so crazy about The Martian is that Weir basically managed to catch lightning in a bottle. It’s an exciting white-knuckle ride, with end-of-chapter cliffhangers. Every chapter starts out with protagonist Mark Watney finding some new way to survive, and ends with something else going disastrously wrong. xkcd says it best:

(Oddly, Andy Weir came up with the very same metaphor completely independently in a video interview with Adam Savage, filmed months ago. The interview is interesting in other respects, too, as Weir discusses what kinds of changes he had to make when Random House had The Martian professionally edited.)

The Martian is a cross between Apollo 13 and The Castaway that perfectly captures the loneliness of stranded survival on the one hand, and the globe-spanning drama of disaster rescue missions on the other. The language is more than a little salty at times (they’re toning it down for the movie), but then, if you were stranded all alone on Mars, you’d probably use some salty language yourself.

Judging by the trailer, it looks like the movie has managed to keep most of the best bits from the book. I’m really looking forward to it.

The novel is only $6 for Kindle. [Update: $9 now. I guess becoming a Ridley Scott movie drives up prices.] The days of 99 cents (and, for that matter, free download from Weir’s site) are long gone, but the book has now been through a professional edit pass so you’re getting a better product for your money. And it’s still cheaper than a lot of paperbacks, not to mention most fast food meals. If you haven’t read The Martian yet, I highly recommend it.