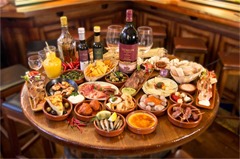 Another day, another company with a new e-book sales model. This time it’s Tapas Media, named after a style of restaurant where you munch on lots of little snacks (which is thought to derive from the practice of using slices of cured meat as a makeshift lid for your glass to keep flies from getting into your drink).

Tapas Media’s idea seems to be to apply the same “lots of little snacks” philosophy to e-books. Using its app, you start out with a sample of the e-book, and then you can buy the whole rest of the e-book, or just buy a little chunk of it at a time using in-app purchases in the form of “keys” you can buy. The idea is to make the reading available in bite-sized chunks, mimicking the strategy of successful mobile games that you can play for three to five minutes at a time—just as the ability to start reading for free then pay more to read the rest mimics the style of “freemium” mobile games.

Nate Hoffelder at The Digital Reader is skeptical, given that the point of freemium games is to get around how difficult it is to “sample” a game without getting to play it. But e-books are simple to sample—just check out Amazon. He also notes that half of in-app purchase revenue for games comes from only a fifth of a percent of users, which doesn’t seem to bode well for the potential profitability of such a venture.

But I think there’s an even more basic objection than that. The idea of buying your e-books a three-to-five-minute chunk at a time is just too fiddly. There are some serial e-book services, such as Serial Box, Crave, or Harlequin’s attempt at chopping a novel up, But as I noted in the Harlequin article, I can’t see why anyone would want to buy a novel a chunk at a time if the whole thing is available. It’s too fiddly. E-book readers are used to reading a sample and then buying the whole thing. Why deal with in-app purchases to get it a five-minute chunk at a time?

But we’ll see. I’m certainly not the final arbiter of what kinds of books people might want to buy, and we need people trying new models—including ones I don’t think will fly. I don’t know everything. It’s always possible one of them will actually work.

But I’m not holding my breath.