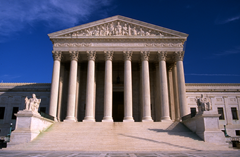 Andrew Albanese, one of the analysts I’ve most followed on the Apple anti-trust matter, has weighed in on the likelihood that the Supreme Court will get involved in the case. He checks in with various legal experts and reviews what’s been said about the alleged “circuit split.”

Law professor Christopher Sagers of Cleveland State University thinks it’s unlikely, because the legal issues surrounding the case simply aren’t compelling enough to make it one of the 75 to 80 cases SCOTUS agrees to hear out of the 10,000 petitions it receives per year. He calls it a “fact case,” where the issues of law are relatively clear and the decision turned on the facts of the matter.

Albanese also points out that the question of the circuit split was addressed in the majority and dissenting opinions of the appeals court. Dissenting Judge Dennis Jacobs, who felt the case should have been judged according to the rule of reason, proposed the idea of the split.

In her majority opinion, however, judge Debra Ann Livingston rebutted Jacobs’ dissent and stressed there is no circuit split. The “per se” condemnation in Apple’s case is correct, she noted, because it does not apply to Apple’s vertical contracts with the publishers, she explained, but to Apple’s “uncontested” role in organizing the publishers’ conspiracy to raise e-book prices. And the Supreme Court, she adds, “has explicitly distinguished situations in which a vertical player organizes a horizontal cartel.”

But Sagers and Bob Kohn both think that if SCOTUS should decide to take the case, it might bode well for Apple, as it suggests that at least four Justices are inclined to use the matter to make some new laws.

Either way, it will be a while before we find out whether the Supreme Court wants to deal with the Apple matter. And if the Justices pass, Apple will have to cough up that settlement money.

Andrew Albanese’s e-book, The Battle of $9.99, is one of the best analyses I’ve seen of Apple and the publishers’ behavior and Judge Cote’s legal decision.