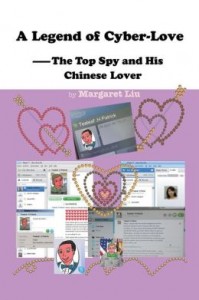 When is a memoir a real memoir, and when is it a fictional journey from confusion to reality? In the case of a new e-book in English, Taiwanese memoirist Margaret Liu has become the focus of a series of tabloid headlines for penning a book that ”claims” she was David Patraeus’ Taiwanese lover.

Liu, in her mid-30s and with a PhD from a Florida university on her resume, self-published a controversial book earlier this year recounting what she says is real and ongoing “romance” with a former American CIA director. but Most Taiwanese media outlets, however, explained the ”affair” as part of a vast, worldwide Nigerian Internet scam targeting lonely women.

Liu has been in the local news over this story for several years. Her ebook, titled “[easyazon-link asin=”1466935081″ locale=”us”]A Legend of Cyber-Love: The Top Spy and His Chinese Lover[/easyazon-link],” was published last April and available on Amazon, is her version of the events that transpired. (In addition, Liu has released a Chinese-language edition for readers in China and Taiwan.

When I asked Liu  in a recent email interview what her motivation in writing the memoir was, Liu said: “It is a real story. I promised David H. Petraeus (who I call ‘Tealeaf H. Patrick’ in the book) that I was going to write a book about our love story and that it might help us to earn enough money from book royalties to meet with each other some day. Since he was a top official of the U.S. government, the security concerns are quite expensive for any trips he might take overseas. As far as I know, at this point, he already has some financial problems. So I hope my book can bring us together, using the royalties to finance our meeting.”

Liu said that she wants to reach an audience of Taiwanese and international readers. “The major content of the book consists of Skype conversations between me and the character I call ‘Tealeaf.’ Since I wrote the book in English first, with an English-reading audience in mind, I hope I can attract an overseas readership. And ‘Tealeaf’ is an internationally-famous figure in real life, so I think the book should find a big audience overseas. It’s a love story, most of all. Everyone loves love stories,” she said.

When asked if there could someday be a Hollywood movie about her story, and if she was ready to sign a contract with a Hollywood agent, Liu said she was interested. If there was a movie deal, she said she would leave the casting to the producers, but that Tom Cruise is her favorite actor and might fit into the story.

Liu is still hoping to meet the man of her dreams, she said, and the book is part of her plan to meet him someday — in the flesh, face to face. All she has now are the dozens of emails she says he sent her over a long period of time.

Liu. who grew up in Taiwan and went to the University of Florida for her masters and PHD degrees,  said she has recently joined a major political party in Taipei as part of her plan to meet Petraeus.

“Hopefully, someone in the party organization can help arrange a meeting with ‘David’ for me,” she said. “I also hope that in my own way, I can I serve society and the country using the expertise I  have gained through all this.”

While some of the earlier news reports in Taiwan about Liu have been mostly negative — and even in some cases mocking in tone —  she said she was aware of the media issues but remained steadfast, noting: “I guess the local media here dealt with this news in that way in order to protect me and protect the country in order to avoid any possible wars.”

Liu said she paid to have the book self-published, using her own funds and contracting with Trafford Publishing to produce the book in paperback. It is available as both an ebook and a print paperback, she said.

One question many readers want to know is if Liu ever met David Patraeus when she lived in America. She said she never did.

“Never. I never met David Petraeus in America,” she said. “Eventually, I found out that the reason why I had connections with him — as I detail in my book with the character named ‘Tealeaf’  — was because I met some friends in Florida when I was studying there who knew him.”

When asked how many copies of the book have been sold so far, Liu replied: ”To be honest, I have no idea. I have heard rumors that it has sold upwards of about 100,000 copies, but the record on my publisher’s website shows only one book sold.”