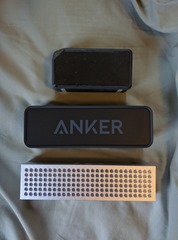 Remember how I mentioned that a Bluetooth speaker is a great way to listen to audiobooks and other media with a Fire tablet, rather than its postage-stamp-sized speaker? As it happens, I’ve gotten my hands on not one but two significantly better Bluetooth speakers than the little Jellybox I previously had, and I’ve had occasion to give them a listen. And wow, are they ever an improvement.

It started when I had the chance to get $20 off a $36 Anker Aluminum Portable Wireless Speaker thanks to a promo code Engadget was running. I’ve had pretty good luck with Anker products before, so why not? Then, the day after I ordered that, an Anker SoundCore Bluetooth Speaker went on sale for $30. And since that was an even better speaker (its Amazon price was $40, after all) and another decent deal, and I’d gotten an Amazon gift card with some of my tax refund—so again, why not? 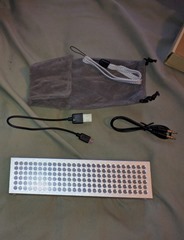 I got the Aluminum speaker first, and was pretty impressed by it. It’s a sturdy, heavy chunk of metal, with physical buttons and switch, auxiliary headphone port, and even a micro-SD card slot for loading an SD card with tunes and playing them via a built-in player (just like my Jellybox). It came with a soft carrying pouch, a lanyard, a charger cable, and a headphone patch cable for hooking it to non-Bluetooth devices. And seriously, that baby is loud for its size. It doesn’t have a great deal of bass response, but it’s a Bluetooth speaker about the size of a TV remote—the sound it does have is amazingly good.

The other day I walked down the street to get a BlueIndy car, discovered the station near me was out, and I had to walk several blocks to get another one. I carried this speaker along with me, synced to my phone, blasting out tunes from Google Play Music at full volume. I felt like one of those guys in the ‘80s who used to walk around with a full-sized, battery-draining boom box on his shoulder…but it was just a little Bluetooth speaker in my hands. Crazy! 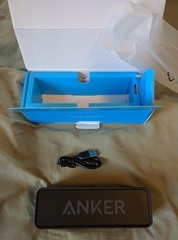 Then today the SoundCore came, and I got to play with it. The SoundCore is about the same size as the Aluminum, but with a more traditional plastic case and front grill. For all that its normal price is slightly higher than the Aluminum model, it actually seems to be the cheaper speaker—it doesn’t have separate physical buttons, just areas on the case with raised symbols to press. Also, it lacks the SD card port and internal player of the Aluminum model, and its speaker drivers are slightly lower powered (3 watts each, rather than the Aluminum’s .5). It also didn’t come with a carrying pouch or audio cable, just a micro USB charger cable.

But for all of that, it actually sounds better than the Aluminum. It’s about twice as deep as the Aluminum, which gives more room for the speakers to expand. It has a much better bass response, and I swear, when I have the volume turned up and hold it up to my face, I can feel it blowing on me when I play music. Even though it’s slightly less powerful than the Aluminum, it has a slightly louder sound and better bass response (though again, a speaker this size isn’t going to blow out your windows no matter what it does). 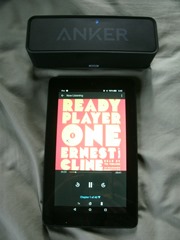 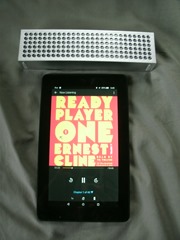 This difference holds true for audiobooks as well. I listened to Wil Wheaton read some of the Audible edition of Ready Player One, switching off between speakers, and his voice was definitely deeper and more resonant from the SoundCore. He still didn’t sound bad from the Aluminum, and certainly not in comparison to the postage stamp speaker in the Fire, or even my slightly better Jellybox . (In fact, since the Jellybox is 3 watts in a single speaker driver, you could say the SoundCore is basically a double Jellybox.) All in all, I think I paid about the right amounts for the two speakers in terms of overall sound quality, which is the most important thing to me.

In any event, I can see a lot of fun times listening to music, books, and videos  with these things ahead. They’ve got sufficient rechargeable battery time for hours, and they can play while plugged into AC for longer periods. When I do my dishes, I can put my Nexus 7 tablet in the cupboard over the wash basin, then one of these on the next shelf up, and get some great sound.

There’s one thing I’m not as thrilled about, and it’s that I can’t seem to get the built-in microphones on either speaker to work with my Android devices—my Nexus 6 smartphone or my Fire, on either device. I did a little investigation into this, and it’s apparently an issue with how Android handles Bluetooth devices—not the speakers’ fault at all. I can get sound out through the speakers, but when recording or talking in voice chat, the Fire or smartphone uses its own internal mic. The microphone seems to work fine when used with my iPad, however. 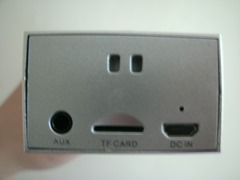 So, if you want some excellent sound for the money, check into the SoundCore. If you want pretty decent sound, but a sturdier case and the ability to play audio files from an SD card, go with the Aluminum. Either way, they’re Anker products. My dissatisfaction with the iPad Mini keyboard cover aside, inexpensive quality seems to be that brand’s watchword.