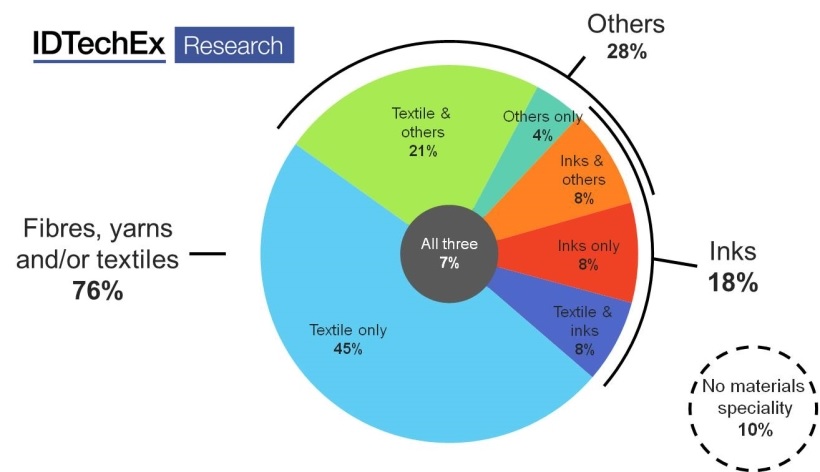 A new research report from IDTechEx, entitled “E-Textiles 2016-2026: Technologies, Markets, Players,” covers the growing field of digital wearable textiles, which could soon be bringing e-reader displays to your wrist or sleeve. And according to IDTechEx, we may see “conductive inks help wearables go truly wearable,” with a market forecast “to increase from under $150 million in 2016 to over $3.2 billion by 2026.”

“We are in contact with textiles for up to 90 percent of our lives, and they are starting to become intelligent,” states IDTechEx. “The basis of this new functionality is the integration of textiles and electronics. From clothing to bandages, bed linen to industrial fabrics, new products integrating e-textiles are being created.” IDTechEx cites Google’s Project Jacquard, which “makes it possible to weave touch and gesture interactivity into any textile using standard, industrial looms,” but this is obviously more of a control and interactivity platform than a display technology. The separate IDTechEx report on “Conductive Ink Markets 2016-2026: Forecasts, Technologies, Players,” covers more of where the display action is, in a market forconductive inks and pastes that “will reach nearly $1.7 billion in 2026 at current metal prices,” IDTechEx claims.

The fascinating potential of “wearable products employing conductive inks” and “stretchable conductive inks in e-textiles” to act as e-reading displays on your wrist, or billboards on your back, is still only at the nascent stage, but the interest and player commitment is clearly there. Flexible e-ink displays such as those outlined in the new partnership between Canatu and E Ink could be simply … ahem … scratching the surface. Instead, the future conductive ink and smart textiles could go deeper, and actually take the connectivity and display technology into the fabric itself.

Which could create an interesting conundrum for a future generation of e-reading fans: Do you hang your coat on the coat rack? Or the bookshelf?