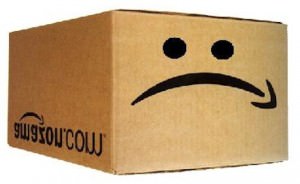 Digital Book World is carrying an article by Stephen Blake Mettee of Hummingbird Digital Media, explaining to publishers that it is, in fact, possible to compete with Amazon for retail book customers. The article gives advice that is fairly common-sensical—don’t help Amazon by giving it favorable contracts or affiliate referrals, and leverage areas like bricks-and-mortar stores that Amazon can’t counter as easily. Really, any halfway-decent marketing consultant could have written the same advice.

But that’s not really what I want to talk about here. The thing that interests me is the idea that publishers need to “compete with” Amazon at all.

In the world I grew up in, the idea of publishers “competing with” a bookstore was about as ridiculous as Marvel and DC having a crossover. Publishers didn’t “compete with” bookstores; they supplied bookstores. Bookstores handled all the messy direct retail stuff so publishers could focus on making the product. How was a publisher even supposed to reach a customer?

Then the Internet, and Amazon, came along and changed the world. Books became e-books, things that you could sell to a customer wherever they or you were. It was possible for publishers to sell e-books directly to customers. (Baen did it for well over a decade, and O’Reilly did it, too.)

Most publishers weren’t interested, but after the whole agency pricing squabble, some started to realize it might be a good idea to find a way to bypass Amazon, who seemed to want all the money, and collect the retail half of the price themselves. And there was Amazon, starting to publish books itself, too. And suddenly we live in a world of blurred lines.

Not that it should be too surprising, I guess. After all, Marvel and DC have had several crossovers by now, too.

If publishers want to try to compete with Amazon, that’s certainly their right, and Mettee’s article provides about the best possible advice for anyone wanting to do so. The question is how effectively the publishers can compete even if they make the best of all that advice.

Under Jeff Bezos’s masterful leadership, Amazon has really made the best of its every advantage. It’s developed its own content ecosystem inside a walled garden, locking customers in by making it difficult or impossible to move content they’ve purchased out. It’s made it easy, simple, and convenient to buy from Amazon.

And Amazon has one of the most recognizable brand identities in America, whereas most publishers are effectively faceless and interchangeable. (If you tried one of those matching puzzle exercises, where you list a bunch of authors on one side and all their publishers on the other, and asked the average person to connect the author to their publisher, how many do you think they’d get right?)

If publishers try hard enough, they probably can compete, at least to an extent. They’ll probably do better by propping up existing bookstores and Amazon competitors, like Barnes & Noble, because those at least share the advantage of offering customers books from every publisher in one convenient location, rather than customers having to go to different stores for different books. But it’ll probably be a long slog. How much time and money are they going to spend on that, rather than improving their core business to the point where they can continue to make money on their sales no matter what Amazon does?

Perhaps one of the most interesting things is what the article didn’t suggest publishers do to compete, and that had to be left to the comments below it: get rid of DRM and unlock the customer lock-in. Mettee never even approaches suggesting that, even though plenty of other people have over the last few years.

But then, it’s sort of to be expected. As I’ve noted before, Mettee’s company Hummingbird Digital Media is itself trying to compete with Amazon for the hearts and minds of publishers—and those publishers are by and large still clinging to DRM like a child to a teddy bear. Unsurprisingly, Hummingbird incorporates DRM itself. “DRM, analytics, data on sales, and automatic deposits are provided.” Even if Mettee agreed that DRM ought to go, saying so wouldn’t exactly be the brightest idea—all the major publishers his business depends on still seem to want it for their works.

Anyway, that’s the world we live in now. Amazon has gotten the publishers so riled up that they feel like they have to “compete” in order to survive. Hopefully while they’re trying to do that, they don’t forget to focus on their core business—finding and publishing good books.

For all that a lot of people make noise about how the publishers should, it’s a bit unrealistic to expect the publishers to remove all their titles from Amazon and go cold turkey, see how long the store would survive without their content available at all. But until and unless they take some kind of extreme measure of that nature, we live in a world where the publishers complain loud and long about how awful Amazon is, but at the same time don’t dare go too far and ticking it off.