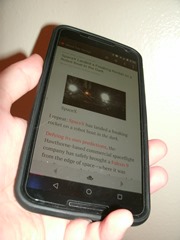 Smartphone users have been reading a lot more e-books lately as smartphones have gotten better and more ubiquitous. But what about news articles? Smartphones would seem perfect for glancing at short-form articles, like the average TeleRead blog post, but what about longer-form content?

The Pew Research Center has taken a look at that question and found, perhaps surprisingly, that smartphone users tend to be just as engaged with longer articles—for the purposes of the study, defined as articles 1,000 words or longer—as with shorter ones. Digital Book World is carrying the press release discussing the results of the study.

Pew used audience behavior metrics provided by Parse.ly to study how readers engage with news content. The dataset doesn’t represent all news content, but covers a broad range of both large and niche media content over a variety of subject matter.

On average, it turns out readers spend about twice the length of time reading longer-form content as reading shorter articles. (123 seconds versus 57 seconds.) This gap remained consistent across time of day and how the readers found the news story. However, there are variations in time spent depending on whether it’s midday or late at night, whether the readers found the article via links from another article or social media, and what the article is about.

Even though most articles studied were shorter ones, the study shows that just about as many people read each article regardless of its length.

“These findings suggest that on small, phone-sized screens the public does not automatically turn away from an article at a certain point in time – or reject digging into a longer-length news article. Instead, the average user tends to stay engaged past the point of where short-form reading would end, suggesting that readers may be willing to commit more time to a longer piece of work,” said Amy Mitchell, Pew Research Center’s director of journalism research.

There are a number of other interesting statistics from the study—for example, people spend more time reading articles they found from internal links rather than those from social media, and they spend more time late at night or in the morning than during the rest of the day. Only 3-4% of users return to news stories on the same phone a second time, but those who do spend more time with those stories than the average. Also, most readers only read one article on a given site per month.

When taken in conjunction with the smartphone e-book habits I linked at the beginning of the article, this suggests to me that people are treating their smartphones as a lot more than just phones. The conventional wisdom would have it that people wouldn’t want to read anything on screens that small, but then again, smartphone screens are creeping upward in size to the point where they rival full-sized (if small) tablets.

It brings to mind a sort of chicken-or-the-egg question: did people start reading more on smartphones because the screens got bigger, or did the screens get bigger because people are reading more on smartphones? I suspect that the reading came first and drove the push for bigger screens, because people were finding these tiny color screens  worked great for e-books even back in early Kindle days.

I wonder how much longer we’ll even call them “smartphones,” given that making phone calls is such a small part of what they even do anymore. Will we ever start calling them something else, such as “micro-tablets” or “communicators”? I suppose that will remain to be seen.