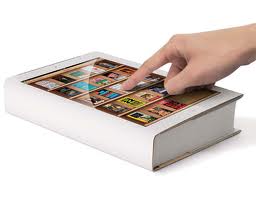 I bought a cookbook this week—in paper—and the Beloved’s first words reaction was a smirk, followed by ‘I’m telling on you!’ This misguided response—the notion that paper vs pixels is an either/or scenario—is a surprisingly common one, and I have encountered it again and again. It always surprises me. Who says it has to be one or the other? Might some books be better in e-form, while others, like the big, glossy cookbook, be better in paper, and a book fan like me can buy them both?

The latest piece by Mike Shatzkin both shares my question and attempts to answer it—affirmatively. Shatzkin points out that narrative reading (fiction and non-fiction) HAS taken hold in e-form and HAS transformed that market. But he also asserts (as I often do in response to remarks like that of the Beloved) that other forms of book have yet to prove themselves in the ebook arena. From the article:

What this means is that the digital future for narrative reading — fiction and non-fiction — is much clearer than it is for any other kind of book. Publishers of novels can apparently count on their sales shifting from print to digital and from in-store to online without losing a lot of readers. And with not much in the way of conversion costs, publishers of these books can proceed with their development with some confidence that the changes in publishing’s landscape and ecosystem won’t throw the calculations they are making for future profits on today’s acquisitions into a cocked hat. But publishers of everything else have no basis for similar confidence.

So what does this mean for the future book market? I think that depends on how you define ‘market.’ Personally, I would like to see authors begin to define themselves less as an amorphous group in this fashion. Each author should treat their book like its own entity, and market it in the most appropriate way. For a glossy cookbook author, that way might be paper. For a fiction novelist, it might be ebook.