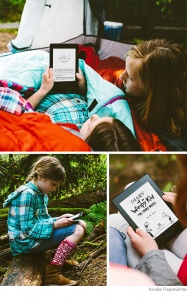 So if you’re like me and have aging eyes and need text to stand out optimally from the background, the Oasis may not be the e-reader for you even if you can afford it.

I use the word “may” deliberately. Just to give Amazon the benefit of the doubt, the illuminated screen background is said to be brighter than on previous models, perhaps because of 60 percent more LEDs. So could the Oasis’s perceived contrast actually be just as good or better? In fact, some reviewers I respect have reported more contrast.

At this point, however, after getting the specs, I’m now skeptical. I won’t go by photos, especially Amazon’s own screenshots, which, simply because of the inaccuracies of reproduction, can show text looking darker than it actually is. I await my own Oasis hands-on to see how truthful Amazon is in claiming that the Oasis offers a “high-resolution 300 ppi display for crisp, laser-quality text.” I absolutely won’t dispute the 300 ppi claim. But to me, “laser quality” should mean just that, and believe me, I have no problem reading normal laser printing. Fodder for the Federal Trade Commission if the Oasis is not at a laser level? We’re not just talking about resolution here.

Very much in a related vein, I also asked the PR person about the possibility of the Oasis including all-bold capabilities or, better, adjustable font weights (as Kobos have). No promises. And not the first time. I’ve been asking Amazon for years for all-bold for people who need it.

Optional bolder fonts would make the actual contrast ratio less crucial by increasing the perceived contrast. That could especially help older people who not always but often suffer more contrast-sensitivity issues than do younger ones. Even without an improved contrast ratio, all-bold font options would still benefit the elderly and others. Why aren’t they there?

Some ageism happening at Amazon? Curious about the age of Chris Green, the Oasis designer, I looked him up on LinkedIn. His listing says he graduated in 1996 from the University of Salford. If he was 22 at the time, that would make him around 42 years old today. As for Neil Lindsay, the Amazon marketing vice president overseeing Kindle devices, he graduated from Edith Cowan University in 1988. So he’s around 50 years old. In other words, neither is exactly a spring chicken, and they very likely have elderly parents still alive, not to mention the parents’ friends. So, Chris and Neil, how about a little more consideration? I know your big goals were a lighter, thinner Kindle and longer battery life, but couldn’t you be missing out on a fair amount of business from older customers if you don’t include an all-text bold option or adjustable font weights? Aren’t you leaving some money on the table? Couldn’t Jeff Bezos and his shareholders be losing out?

Remember, the elderly are among the biggest customers for dedicated E Ink readers. Just watch this CNBC interview with Kobo CEO Michael Tamblyn. “The people who are driving the e-reading revolution,” he said, “aren’t the 18-35 year olds who usually adopt new technologies. This is the first technology transition being driven by 50 year olds, 60 year olds, even 80 year olds.” Of course, Tamblyn almost surely was talking about users of dedicated e-readers, as opposed to the many young people reading e-books on cell phones and tablets. But, yes, it’s the dedicated e-reading devices we’re discussing here.

As for younger users, keep in mind that Amazon advertising for Kindle models bills them as the official e-readers of the National PTA. What’s a child to do if her school has no alternatives? As I’ve noted before, we’re talking about ability-to-learn issues. Some children may need all-bolding capabilities even on LCD tablets such as Amazon’s Fire. And yet the company so far hasn’t offered it on either the E Ink machines or the Fires even though it’s pushing into the K-12 markets.

Smartly, rival Kobo includes all kinds of font options missing from the Kindle models, including, as noted, the ability to change font weights. Most likely the technical challenge of Amazon adding adjustable font weights would be trivial—it could simply include a slider in the Kindles’ typographical menu. But if there is indeed a tech-related obstacle, such as chips or anything else taking too long to execute the changes which the users request with the slider, then Amazon could allow the users to select an bold font option. That’s what Apple does with its iPads and iPhones via the San Francisco font. SF still isn’t quite as bold as I’d like, but it’s a distinct improvement for me over the alternatives.

Lest anyone wonder, Amazon could inexpensively effect bold-related improvements via routine firmware upgrades. No need to yank the current Oasis from the market even before the machines are shipping—that would be absurd. Without delay, however, Amazon should publicly promise firmware updates available in the next month or so to offer adjustable font weights or at least all-bold boldface options for the all Kindle E Ink models and even LCD Fire tablets. Simply put, it would be very classy for Jeff Bezos, Chris Green and Neil Lindsay to show some sensitivity to the needs of older customers as well as others who would benefit from the perceived contrast resulting from greater boldness.

If Amazon does offer a bolding option, I won’t care as much about whether or not the fonts on the Oasis or any other models are laser-crisp. I really, really am rooting for Amazon to do the right thing. I’m a big booster of Amazon hardware in most other respects and admire the company in many ways.

Furthermore, quite aware that the majority of people don’t have contrast sensitivity issues, I might actually find the Oasis to be great for well-off customers who’ll appreciate the extended battery life (with the included charger-cover). As a former owner of a turn-of-the-century e-reader with a wedge shape, I might love those ergonomics. Same for the Oasis’s page turn buttons. So stay tuned. I’m not going to let my particular needs distract me from rating the Oasis on issues beyond price and perceived screen contrast.