A big gap still exists between the battery lives of E Ink e-readers and cell phones, and in particular the Nexus 6 is not as thrifty with juice as it could have been. But Google has caught religion, kind of.

On top of that, the 6P will benefit from power-saving features of Android M. “Marshmellow’s” benefits will spill over for owners of current Nexuses—I’m one. I can’t wait to see the actual numbers. It’s possible that battery life in standby may double. So what will it be like when the screen is on?

Here’s the lowdown on the Nexus 6P—expected to be announced Tuesday—by way a leaked image published in the Verge and elsewhere: 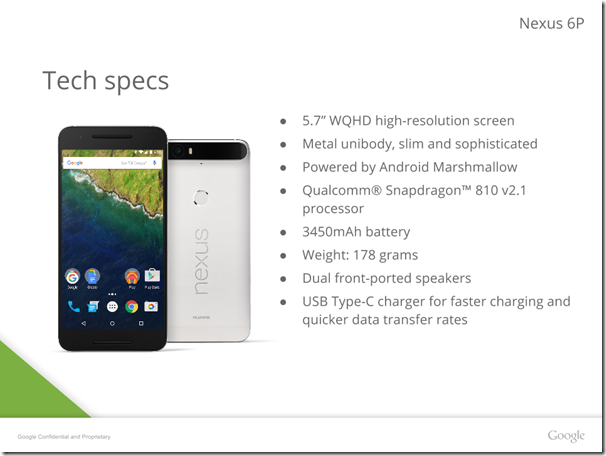 Huawei is making the new Nexus.

No, in in the battery life department, it still won’t be any match for E Ink devices. But it’ll be better.

Related: Earlier Verge story on the 6P. The 5.7 inch display is a little smaller than the current one, but the resolution is still supposed to be 2560 by 1440. Also see SlashGear story on the 6P.

Tip: To stretch out battery life of my Nexus 6 right now, I’m using 3X Battery Saver. What’s your own favorite save-ware for Android?

Oh, and if you really care about longer battery life, you can reduce your screen resolution and try out other tips from AndroidPit.