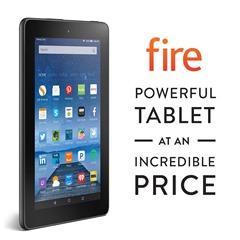 Look out, everyone! On Forbes, Patrick Moorhead exposes the cheap $50 Fire’s dirty little secret! Spoiler warning, go no further if you don’t want to ruin the surprise!

Seriously, Moorhead wrote a whole column about how the $50 Fire tablet is fairly feature-poor and low-performance compared to tablets that cost five or ten times as much. Which…well, it’s the sort of “revelation” that you would expect anyone with the rudimentary grasp of economics of a seven-year-old to have figured out on their own, but perhaps it’s still worth reminding people just in case they think a $50 tablet will bring about world peace or something.

Looking at Moorhead’s points of complaint, we find:

Moorhead admits, on page 2, that “what do you expect from a $50 tablet?” is a fair point, but he wants to make sure that people realize that “some great deals are truly too good to be true.” So far, nothing he’s said about this tablet has led me to believe that someone who pays $50 for it won’t get at least that much of his money’s worth.

And just consider—if the tablet costs $50 new, how cheap is it going to be in a few months or a year or so once they start having refurbs available? They’ll practically be able to throw them into cereal boxes.

Heck, remember all the speculation a few years back that Amazon might give out free Kindles with Amazon Prime subscriptions? When devices start getting this cheap, who knows what could happen? Maybe Amazon will finally do something about throwing them in. Might it give them away free or cheap with some other service? (“Subscribe to Prime Fresh and we’ll give you a Fire tablet at no extra charge to keep your shopping list on!”)

We’ve never had a respected-name-brand media tablet this cheap before, even a low-end one. It’s always been Chinese OEM stuff, or brands you’ve never heard of at Fry’s that were probably made by Chinese OEMs. Here we have one that carries the imprimatur of one of the most trusted names in consumer media and shopping. I look forward to seeing what this does to the digital divide.