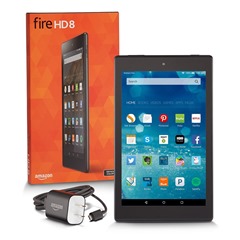 While the Oasis is the day’s big Kindle news, it’s worth noting that there other new devices in the pipeline. The Digital Reader pointed out a couple of weeks ago that a hacker noticed some clues embedded in the latest firmware pointing to a new basic Kindle device code-named “Woody.”

Not much is known about it yet, but the hacker didn’t think it would have physical buttons like the Oasis. It’s unclear what the device will look like, but my guess is it won’t be too much changed from the current basic model of Kindle, except cosmetically. Sweeping redesigns seem to be reserved for the more expensive line.

But TDR’s also noticed that there’s a listing for a new Fire device on the GFX benchmark tool’s database. It seems to be a new 8” Fire HD, featuring a slightly better CPU but notably worse cameras than the one Amazon released a few months ago. (The current Fire HD8 has a 5 MP rear camera, whereas this one only seems to have 1.8.)

With Amazon’s FireOS Android running on a quad-core 1.3GHz Cortex A53 CPU, 1.3 GB of memory, 4.5 GB of onboard storage, and a 1280×800 resolution display, it doesn’t seem like that much to write home about for someone who prefers more full-featured tablets. But it will probably be just the thing for people who regularly consume their media via Amazon. That said, as Nate notes on TDR, the specs aren’t that much better than the current Fire HD 8, and the camera is worse—assuming the specs given on the site are accurate. If you’re going to buy one, you’d probably be better off getting the previous model—especially if the price drops when the new one comes out.