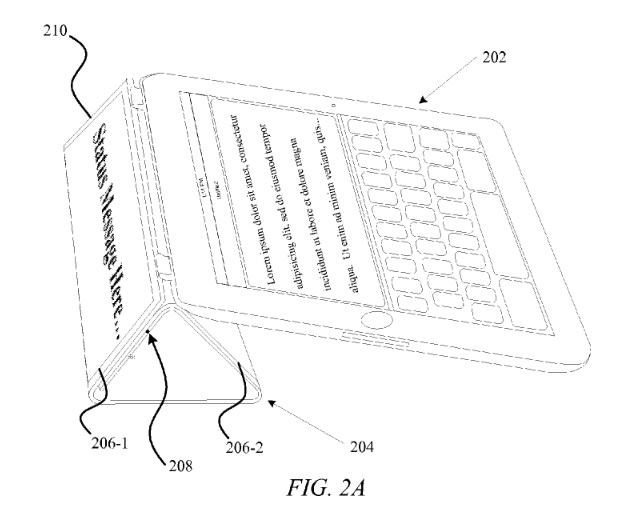 As reported by Patently Apple, an Apple patent just approved by the U.S. Patent and Trademark Office for “a tablet device with a flexible cover” could lead to new enhanced e-reading experiences for iPad owners. The patent itself … ahem… covers a foldable cover with a similar format to Apple’s current Smart Covers, but incorporating “a single non-segmented flexible display disposed over the foldable region and capable of communication with the tablet device and presenting flap visual content in a segmented manner.” In other words, a touchscreen on the outside of the cover, allowing both reading/viewing and interaction with the device inside.

The patent summary notes that “thin flexible display technology can be integrated into the flexible cover without affecting the overall form factor of the cover or tablet device. Adding the integrated display to the flexible cover greatly enhances the overall functionality of the tablet device.” The patent also states that the cover display “comprises a touch sensitive area defining a user input capable of controlling the tablet device when the single flexible flap is in the folded configuration.” One diagram in the filing shows a user drawing on the cover surface with a stylus, with the drawn image appearing on the tablet screen.

The very broad and comprehensive patent filing also includes provisions for external power including solar power, and separate wireless communications. “An accessory that takes a more interactive role with the tablet would also typically need a power source to drive it,” it states. “The operating time of a built in battery can be augmented by the addition of an auxiliary power supply such as a solar panel array to the accessory. For example, a solar panel array spread across a surface of an accessory device in the form of a cover can lengthen the amount of time the cover could be operated between recharging.”

Additionally, “Active communication between an accessory and a tablet device can be accomplished either wirelessly or through a wired data connection. For example, a wireless data connection utilizing the 5 GHz 802.11n protocol can provide sufficient data transmission bandwidth to transmit a high quality video stream along the lines of NTSC 1080p 30 fps video… In another embodiment power could be transferred to the accessory from the tablet itself through either a wireless or wired medium.”

Of course, there is no guarantee that Apple will make this accessory in its entirety. But it does show where Apple’s thinking is heading on its Smart Cover line, and we can probably expect to see some items in the whole plan appearing in due course. I’m betting that an e-ink cover for an iPad, or one incorporating the same kind of color display seen in the Apple Watch, could be quite an enhancement to your e-reading pleasure.