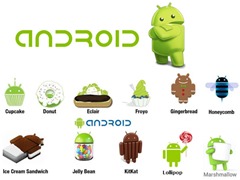 Does Google have a problem keeping Android current for most users? Possibly—but if so, it’s probably not a problem for most e-book readers.

The article goes into detail with analyses of phone price points and so forth to try to explain why so few Android users are using the latest version of the operating system, but I’m not so sure that level of detail is really required for an explanation. Really, the different nature of the platforms mean that a direct comparison is like comparing oranges and…well, Apple. There’s only one manufacturer of hardware that runs iOS—Apple itself. So Apple doesn’t have to deal with fragmentation, or with OEMs or phone companies who don’t want to plow the necessary time and resources into cranking out updates for inexpensive devices that are “good enough” as-is.

Meanwhile, Google, which does have to deal with those problems, started compensating a couple of years back when it moved more features traditionally associated with the operating system into its Google Play Services application, which it can and does update via the Play Store—bypassing recalcitrant OEMs and phone companies altogether. So, phones that can’t get the latest version of Android may not get all the latest features and gimmicks, but they will still be able to run most current Android applications because Google’s directly updating the components they need for that.

Google’s new “Instant Apps” feature, which will allow apps to download just the code needed for their specific device, is supposed to help with this—allowing users not to need to download apps they might rarely use, but get results from those apps within search. Apple Insider holds that it’s actually meant to help Google by keeping users from getting frustrated and giving up by being prompted to install an app they don’t use. Either way, it’s going to support any version of Android all the way back to Jelly Bean, reaching the vast majority of Android users (75% or more). It also sees Google being gradually pushed out of iOS as Apple replaces Google search services with its own equivalents.

In any event, this probably has the most meaning for people using the very fanciest new applications—stuff that needs the latest libraries to do the newest thing. That probably does not apply to the majority of e-reading applications, which are usually little more than mechanisms for putting text on the screen—one of the simplest of activities, going all the way back to the humble Palm Pilot whose memory measured in megabytes at most. I imagine that a Jellybean Android device would make a perfectly usable e-reader for most purposes even now, so from the point of view of reading e-books, does it really matter whether you have the latest and greatest?