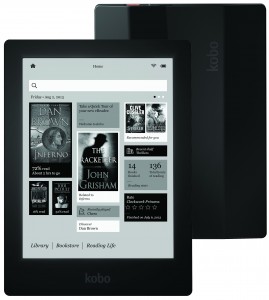 When Will We See Mass Adoption of Digital Classrooms? September 2014 (Digital Book World)
To give you a sense of how big a market we’re talking about, in just the U.S., nearly $1 trillion was spent on education by the government, according to federal budgets and the Census. Some chunk of that went to content and other learning materials — which are being disrupted and can be replaced by technology…or so is the hope.
* * *

Kobo’s New Premium eReader Went From Cutting Edge to Obsolete in Only a Week (The Digital Reader)
If you pre-ordered Kobo’s newest ereader because it was a premium device, you might want to rethink that decision. E-ink announced new screen tech today and the Aura doesn’t have it.
* * *

Dr. Seuss Available as eBooks for the First Time (Good e-Reader)
Random House Children’s Books, the publisher of multi-award winning and best-selling children’s author Dr. Seuss’ entire catalog of children’s content, announced today that it would begin releasing most of the author’s forty-four books as ebooks for young readers, starting with fifteen titles near the end of this month. The ebooks will keep the original layout and beloved illustrations, but will also incorporate a read-aloud narration.
* * *

Kindle Daily Deals: “TekWar: 1” by William Shatner (and 3 others)