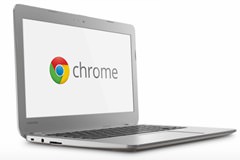 Of course, that’s not why Google is doing it, but it does make sense for e-books—as well as for most other purposes to which people put mobile devices these days.

The Wall Street Journal reports (behind a paywall, so plug the headline into Google to read) that anonymous sources have explained that Google will be merging ChromeOS and Android into one operating system, which they plan to release in 2017 but demonstrate in prototype form next year.

It’s not exactly a surprise. At the time ChromeOS and Chromebooks were first proposed, tablets were not yet the major thing they are now, and nobody was sure which way the future of mobile devices lay. Hence, Google hedged its bets by backing two completely different approaches—tablets with Android, and light laptops with a desktop OS based on their Chrome desktop browser. And then ChromeOS effectively fizzled, while Android exploded.

But now, given that the success of the Microsoft Surface has shown people actually want tablets that can turn into light laptops (or vice versa) with a hybrid tablet/desktop OS, Google is going to move in that direction. We already saw it last month when Google released its Pixel C, applying a Chromebook device name to an Android tablet instead. The WSJ says “Chromebooks” will get a new name, though doesn’t say what it will be.

Perhaps the most intriguing aspect of the merge is that ChromeOS’s functionality will be folded into Android, which means Android will take on some of the same hybrid features that Windows 10 does—gaining some desktop chops for its mobile OS. That’s one area where Android currently falls short—while you can use it with a keyboard and mouse, their functionality feels like an afterthought. You can’t really do anything with them that you couldn’t do with your finger, other than type faster and more easily point at things on the screen when it’s propped up with a stand.

But it also means that Chromebook-form-factor devices will gain the benefit of the considerably-more-mature mobile software currently available for Android tablets—especially e-book reading software. E-books have been one of the big uses for tablets, after all, to the point where a recent Pew report suggests tablets may be beginning to supersede e-ink devices.

Some people do like to read e-books on laptops, too, though that’s generally not as common. But there aren’t a whole lot of Chrome (and, hence, ChromeOS) e-book apps apart from Google Play Books and the usual passel of third-party EPUB readers—certainly no Kindle, Nook, or Kobo for Chrome/ChromeOS. (They may have non-Chrome-specific web versions, but that’s not the same thing as an optimized app.) But there are Kindle, Nook, and Kobo apps for Android, as well as other e-reading apps that have been further developed than their ChromeOS alternatives just because so many more people use Android.

This additional software maturity will play out across every mobile app category, of course—there are plenty of Android apps with no ChromeOS counterpart. But it will be especially meaningful for e-books.