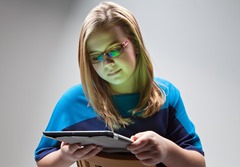 Feeling a little blue? Well, here’s some news that might make you less so. Or at least it might help you to see less blue light while you’re reading e-books on your tablet or phone.

ExtremeTech has an article looking at the precise nature of the effect blue light has on your sleep, and why—the way that research suggests it causes your body to cut down production of melatonin. It mentions various ways of cutting down blue light, such as F.lux, Fire’s Blue Shade, Google’s Night Light, or Apple’s new Night Shift mode for iOS.

It’s good that Apple is offering the ability to adjust your iOS device’s blue light emissions—but also a little ironic, given that the company outright blocked F.lux from working on its devices due to SDK restrictions. In any event, Apple has made it so you can enable or disable Night Shift with just a swipe and a tap, so it’s easy enough to turn on or off when you need to.

But it’s possible you might actually not need to, if you use the new Ocushield light-filtering screen protector. It claims to filter out selected wavelengths between 400nm and 460nm, to cut down on sleep-hurting light while not making the screen look as orange as traditional color-shift applications. (Though the funny thing is, that ExtremeTech article suggests it’s light between 460nm and 490nm that’s actually the most disruptive.)

I’m not sure exactly how Ocushield could work, given that the light wavelengths that cause the problem are visible light, and if you block out any portion of visible light you’re going to make the remaining light’s color balance look different. Another problem is that you can’t simply turn a stick-on screen protector off when you want the full color spectrum during the daylight hours. Still, it’s good to have the option available for people who want it.

Another easily-removable solution is to start wearing blue-blocking sunglasses. Here’s an article from Clarke EyeCare Center discussing the issue and plugging polarized BluTech glasses lenses. Those will cut out blue light not just from e-readers but from everything else as well. Of course, the danger you run into there is people might start mistaking you for Bono from U2. But then, even Bono wears those orange sunglasses for his health.

“Orange” you glad there are more ways to cut down on your blue light exposure?