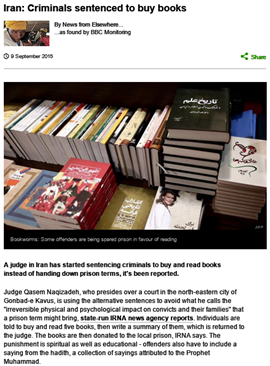 If you’re a minor criminal or juvenile offender in an Iranian city, a judge may let you buy and read five book instead of going to jail. The BBC reports:

“Judge Qasem Naqizadeh, who presides over a court in the north-eastern city of Gonbad-e Kavus, is using the alternative sentences to avoid what he calls the ‘irreversible physical and psychological impact on convicts and their families’ that a prison term might bring, state-run IRNA news agency reports. Individuals are told to buy and read five books, then write a summary of them, which is returned to the judge. The books are then donated to the local prison, IRNA says. The punishment is spiritual as well as educational—offenders also have to include a saying from the hadith, a collection of sayings attributed to the Prophet Muhammad.

“A recently adopted law means judges are now able to decide on alternative punishments to prison in some cases, the report notes. Judge Naqizadeh’s literary sentences are being used for individuals convicted of minor crimes, teenagers and people with no prior criminal record, and they have to choose from a selection of approved texts.”

Oh, the irony! In certain ways the Iranians are actually ahead of some trogs in the UK who, until overruled, would not let prisoners receive books from families. Who says books need be dangerous? Mind you, the parallel isn’t exact. Notice the phrase “approved texts” in the above paragraph?

Still, this is definite progress and reflects the philosophy of the Changing Lives through Literature program here in the U.S.—already a success story, if we go by research mentioned on the Changing Lives site. The right books taught the right way can build empathy and encourage self-reflection, no small help as crime preventers. The Reader Organisaton, in the U.K., might well have have some of the same reasons in mind for prison settings, among others.

What’s more, I mention Changing Lives in The K-12 and Economic Cases for a National Digital Library Endowment. Imagine all the billions we could save each year if, even by just one percent, we reduce the recidivism rate among offenders. Additional cost-justification for the endowment!

Already the Bexar County Bibliotech library in the San Antonio area has been experimenting with e-books for prisoners, and OverDrive is a major supplier of digital books for prison reading.