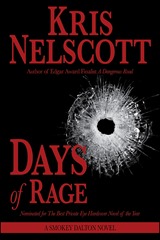 Self-publishing booster Kristine Kathryn Rusch, who has had a great deal of experience both editing and writing under the traditional publishing system, has posted another excellent essay about the business of writing to her blog, The Business Rusch. (See earlier TeleRead coverage of Rusch’s posts.) In this post, she details how mistreatment by the traditional publishing industry killed a novel series and very nearly her love of writing altogether.

Rusch wrote the Smokey Dalton books, a hard-boiled detective series featuring a male black character as the first-person protagonist—and encountered surprising amounts of resistance at every turn. It seemed that, judging by the sort of responses she kept running into, white women weren’t allowed to write stories from the viewpoint of black men, and the publishers simply didn’t know what to do with such a book.

Her agent actually suggested hiring a black actress to play her on book tours. She got six-figure offers from publishers that evaporated when they learned she was white. When she did get the books published, through St. Martin’s Press for a four-figure advance, the covers were terrible. And she had trouble getting any merchandise support for her book tour stops because “there are no black people” in the places she was touring, and her publisher kept trying to get bookstores to put the books in the “African-American section” (which they wouldn’t, since the author was white) instead of the mystery section where they belonged.

For the first time in my career, I had done everything right—and I knew it. I had written the right kind of book, I had gotten better with each volume, I had readers who loved the series and told friends about it—and the books failed.

Not because of me.

Not because of my editor, who was a gem.

Because of my publisher. They refused to go back to print on the later books. They “tried” to send the books out big, but never printed enough copies to fulfill to the bookstores. Let’s not even talk about the covers, which are spectacularly ugly on the books that they wanted to take big.

I watched as this publisher destroyed a series that could have been popular, if the publisher actually acted like it wanted to sell books.

Fast-forward to the present day, when the e-book revolution finally got off the ground, Rusch wrote another book in the series, and reissued the earlier books, through her small press publisher, WMG Publishing. The books are finally getting the treatment Rusch wanted for them, she knows she has a market for the spinoffs she always wanted to write, and they’re not hostage to a traditional publisher’s mistreatment anymore. And she feels free to speak out about it now, because she doesn’t need to worry about being blacklisted from traditional publishers anymore.

I am so lucky that the publishing world changed, and I was able to move with it. That’s why I write the business blog, hoping that other writers realize there are opportunities now that didn’t exist five, ten, or twenty years ago.

Yes, traditional publishers will be better at doing some things than self-publishing writers. But that assumes that those publishers actually choose to do those things. Horror stories like Rusch’s suggest that it’s getting those publishers to care that’s the tricky part.

Update: This story was picked up by the Guardian’s self-publishing blog.