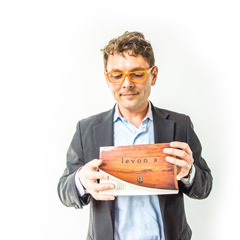 Another case of e-books not adequately mirroring a super-fancy print book has come to light. In this case, the book in question is levon a by Jeff Radke. Radke blogs on The Writer’s Block that he is extremely disappointed by the dearth of formatting options available in converting his printed book to an e-book.

The complaints start with the lack of a properly textured cover, as his printed book was designed “to take the shape and 3D form of an old wood jewelry box containing… get ready for this… a severed hand of a baby, which is central to the novel’s plot.” Of course, that’s not possible with an e-book, but it goes on from there.

You can’t duplicate the typesetting, which is specifically designed for the print book, and the one-size-fits-all text of an e-book discards “the carefully considered spacing between words, the choice of font size and grouping of words on a line”. Furthermore, the print book contains various puzzles, with symbols in the margins to denote specific letters in the text—something else that’s not possible with an e-book.

The icing on the cake is that the page numbers of the book run backward, starting with 333 and counting down to 1 at the end. (It ties in with how the book’s title is “a novel” backward).

To my disappointment, there appears to be no way of making the page numbers go in reverse on an ebook! I didn’t believe the IT people tried hard enough to tackle this problem at first. There is always a solution, right? Well if anyone out there knows of one, you are a coding genius. My publisher tried everything. Without the page numbers moving in reverse, the ebook version loses its charm.

This is the rare edge case where the e-book format that’s sufficient for 99.9% of print books simply falls down, because it’s designed to meet the needs of the lowest common denominator. For most e-books, typography and font size doesn’t matter so much, and there’s no need for anything in the margins. And as for page numbers, don’t even get me started.

It seems that a good part of the artistic value of Radke’s book is tied up in its idiosyncratic presentation. It’s an objet d’art in the truest sense of the word—but our current e-book formats simply aren’t designed to leave room for idiosyncrasy. Unlike the “e-books” on Mozart and wine I looked at in December, this is a book in its truest form—no multimedia or interactivity, just symbols on a page. But it runs into the same problem that our current e-book formats simply don’t support the things it wants to do.

But what can Radke do about it? About the only way he could get the presentation he wants is to release the book as a PDF, as has frequently been done for other books that wouldn’t translate well to EPUB/Kindle—for example, role-playing games, with their multitude of tables and charts. Or, alternately, perhaps he could have some kind of app crafted to encapsulate the book as he wants it to appear.

But when it comes to creating an e-book format that will preserve the book’s uniqueness but read in standard e-readers and apps, books like this are always going to be out of luck—there are simply so few of them that there’s never going to be sufficient demand to engineer an e-book format capable of supporting their quirky rule-breaking. One-size-fits-almost-all is good enough for everybody else.

That’s sad for Radke and his objet d’art, but I don’t think most people who read e-books would complain. After all, if they just want to read a straightforward story, not solve puzzles in the margins or marvel at backward page numbers, it’s already got everything they need.