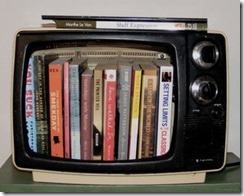 At an industry conference, the head of NBC Universal has expressed the perhaps controversial view that there is now too much scripted television. Between the broadcast networks, the cable networks, and now streaming video companies like Netflix, Hulu, and Amazon, there is simply “too much” of a good thing.

“Nothing different has happened in the last month that wasn’t happening a year ago or three years ago,” [NBC Universal President Steve] Burke says. “The good news is people are watching more video than ever before, they’re just watching in places that often aren’t rated, and aren’t monetized.”

But “when $50 billion in market [value for media companies] flies out the window in a week, it’s an overreaction….They will just have lower growth rates than they’ve had.”

That may well be right. I’m not a great expert on the broadcast media market; I can’t say. But from another perspective, this sounds an awful lot like legacy publishers complaining about the “tsunami of crap” that self-publishing is bringing to the book market. After all, self-published books and e-books aren’t reviewed by most media outlets, or counted on most bestseller lists, so from the standpoint of “traditional” publishing, the money that goes to them is simply removed from the industry. And who knows how well-written those things even are?