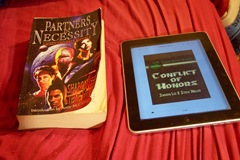 I was put in mind of that old conundrum recently when I picked up a used paper book the other day. Sharon Lee and Steve Miller’s Partners in Necessity, an 848-page trade-paperback tree-killer comprising the first three novels in their Liaden Universe setting.

This book is 8” x 5” x 2.5”. I do not have a scale, but if I use the rule of thumb of dividing cubic inches by 39 to get pounds, the book turns out to weigh a little more than two and a half pounds. That’s over one pound more than the iPad, which contains all three of those books in electronic form (and most of the rest of the series besides).

Yet if I hold them both in my hands, it is the iPad that feels heavier, unless I support them both on the flat side with my palm so their whole weight presses down directly on my hand. Why is that?

Like in the feathers vs. lead question, the iPad is much denser. If I’m holding it upright, the weight it does have is distributed over a smaller surface area. It pulls or pushes on the skin of my hands harder, so it feels like there is more there pressing down.

As with snowshoes on booted feet, the greater surface area of the paper book means that its weight is more evenly distributed. If you were to hold a pound of feathers in one hand and a pound of lead in the other, the denser lead would definitely feel heavier, even though they weigh exactly the same.

I’ve thought about this as I occasionally see people complain that  the iPad is “too heavy” to use as an e-book reader. It’s really only about as heavy as a 1 1/4” thick average hardcover book, and people don’t complain about how heavy those are. (Except for veteran e-book readers who prefer to keep their books on a device in their pockets, that is!) It just seems heavier because it’s so much more compact.